Recent heavy rainfall may have set the stage for dampening off diseases of soybean seedlings.

Rainfall totals since May 9 range between 2 to 4 inches in most of the southern one-third of Michigan. Areas of Berrien, Allegan and Ottawa counties have had even higher precipitation totals over the last seven days. Rainfall intensities over 2.5 inches an hour were recorded in Van Buren County on the late afternoon of May 13. Soils were saturated, with some ponding and erosion occurring on fields that are prone to the problem. Soybean seedling diseases are often associated with wet soil conditions following planting. Three main pathogens, Phytophthora, Rhizoctonia and Pythium, are responsible for the majority of the soybean seedling diseases which cause the dampening off symptoms and seedling death early in the year. Observing the incidence of damping off diseases in your field and properly identifying the causal pathogens can help you to make better management decisions. 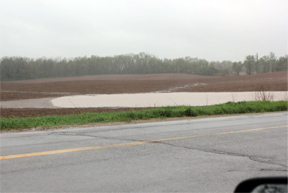 Pythium is a fungal-like pathogen that usually occurs following cold wet conditions following early planting. Infected seedlings often exhibit a grayish to brown coloration before the seedlings die. Mortality usually occurs before the first true leaf is developed. When seedlings are about to die, there is often a brown discoloration on the plant from the soil line to the top of the plant.

Phytophthora symptoms are very similar to Pythium. However, Phytophthora generally occurs under warmer soil conditions compared to Pythium (80°F), and may be more common on later planted soybeans. Phytophthora can also infect plants later in the season. No-till soybeans may be more prone to Phytophthora infections. It is common to see more or less circular patches of infected plants in fields. The soybean gene Rps1k is used in soybean varieties to provide resistance to many races of Phytophthora found in the Midwest; however, pathotypes, or races, of Phytophthora are overcoming this resistance source.

Rhizoctonia infections often occur on warmer soils as well. Warm, wet conditions often favor this disease. It can often be found in more or less circular patches in the field. Infected tissues often manifest themselves as a reddening of the soybean stem near the soil line. The infected tissue remains firm, compared to the softening of infected tissues from Pythium and Phytophthora. 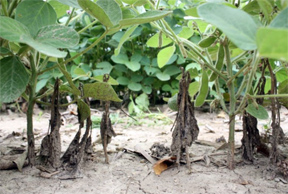 Seed fungicide treatments can help reduce the incidence of soybean seedling diseases. However, not all seed treatments control both Pythium and Rhizoctonia, so a little homework can help you to decide which fungicide to use. Targeting fungicide seed treatments in fields with disease history, in fields where soils tend to stay wet or where soybeans were planted for two or more years in a row, can help to reduce costs. These pathogens survive in the soil and on plant residues.

Dr. Martin Chilvers, MSU Department of Plant Pathology, is interested in helping producers to identify seedling diseases that cause soybean seedling mortality on your farm. If you are having trouble, contact MSU Extension field crops pathology educator Bruce MacKellar at 269-657-8213 and we will help you to send samples or report the incidence to Chilvers.