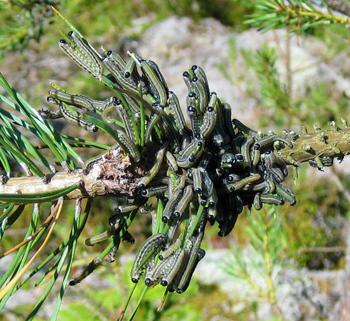 One of nature’s unique creatures is the European pine sawfly. Its immature stage is a small larva with the appearance of a caterpillar that is a non-stinging relative of bees and wasps. Though the larvae of this sawfly is not very big (fully grown larvae are about 1 inch), its presence on a pine tree can be devastating because it feeds in colonies of 20 to 200, stripping pine trees of 1- to 2-year-old needles.

Feeding in mass, the sawfly larvae protect themselves by rearing up their heads at the same time when disturbed, scaring off potential predators. The Michigan State University Extension Garden and Landscape Hotline at 888-678-3464 takes many calls on sawflies feeding on pines each spring.

European pine sawflies prefer Scotch, red, mugo and jack pine, but are sometimes found feeding on Austrian and white pines. Larvae are hard to spot when they first hatch out. Feeding often goes unnoticed until a large portion of needles have been eaten. Look for grayish-green larvae with shiny black heads feeding on needles. It may be easier to first spot the areas of the pine with missing foliage. The colony starts on ends of branches and moves down the branch as it consumes foliage and then spreads out to other limbs. In heavy populations, a pine may lose all of its needles from past years, leaving only the new growth. Loss of large amounts of needles reduces the plants ability to produce food through photosynthesis.

Now is the time to be a smart gardener by checking your pines for this pest. Young larvae at first only feed on the needle surface, leaving behind brown, wilted needles, but as they mature into bigger larvae they will consume the entire needles. MSU Enviro-weather lists the European pine sawfly as having already hatched across the Lower Peninsula of Michigan. Egg hatch occurs over the period of 100 to 220 growing degree days (GDD) – 100 GDD occurred around the first week of May. Sawfly larvae will continue to develop and feed on pines into June. Scout now for this insect before larvae reach their full size and potential to damage pine trees.

Once feeding stops in the summer, the sawfly larvae will drop to the soil or move into crevices on the tree to build a papery cocoon to provide protection while they change over into adult sawflies. Adult sawflies emerge from these cocoons in late August through late fall. Sawflies live a short time as adults to mate and lay eggs. The sawfly female cuts small slits into needles where she deposits eight to 10 eggs per needle. Sawflies survive the winter as eggs in the needles to hatch out the following spring.

Control measures are directed at the young larvae. Remove larvae by pruning out a colony found on a branch using a strong jet of water to blast the larvae off of the plant, or by using an insecticide such as cyfluthrin, permethrin, insecticidal soap and spinosad. When using a pesticide, it is best to spot-treat areas of infestation since they are often localized. Always follow label directions.