Check your asparagus field for aphids

Scout now for European asparagus aphids and know how to manage this rare Michigan pest, as severe damage could lead to yield loss next year or even plant death.

The European asparagus aphid (Brachycorynella asparagi) is a rare find in Michigan asparagus fields in most years, but 2011 was an exception. In September, this pest built up large populations, warranting investment into managing its populations.

Asparagus aphids cause damage to the plants by injecting a toxin when feeding and a few aphids per plant are enough to lead to economic injury. Aphids do not feed on the spear, but prefer to feed on fern, causing bushy, distorted branching, yield loss for next year’s crop, and, if damage is severe, the plant may be killed. The action threshold in Washington for asparagus aphids is first detection, meaning that if aphids are found, an application is made to control them.

The asparagus aphid overwinters in the egg stage on the fern residue left in the field. Eggs hatch in the spring; nymphs and adults feed on the spears and fern. Their only host is asparagus. Throughout the summer, aphids reproduce live nymphs without mating with males. In established asparagus fields in Washington, aphids have two generations per season: one in August, followed by a second generation in September. Non-bearing fields and nurseries can have three or more generations in a season.

Asparagus aphids can be easily distinguished from other aphids because they are very small (1 to 1.5 mm), grey-green with a bluish tint and the body is covered with a white, waxy secretion. They have inconspicuous cornicles (two “exhaust pipe” like structures on their back). 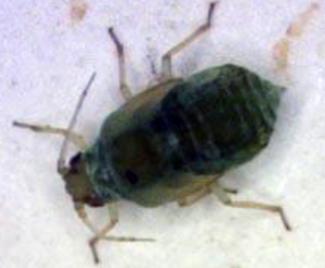 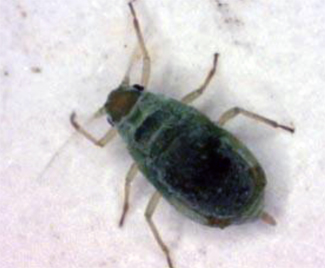 Place a white beat sheet (larger is better) at the stem below the fern. Put your arm around the bush and shake the fern vigorously into the beat sheet. Closely examine the beat sheet for aphids. Look carefully as the aphids range in size from the point of a pencil to substantially smaller, almost microscopic, for the early immature stages.

Populations tend to build up later in the season in established asparagus after the field is in full fern. Young fields where spears are not picked, nurseries and volunteer plants outside the fields can be the sources of aphid infestation for later in the season. Asparagus aphids are a regular problem on the West Coast; therefore, experts in these areas have tested management practices. Please note that only the first three products in Table 1 are currently registered for use in asparagus.

Table 1. Results of the 2010 insecticide trial for asparagus aphid management. Plots were three rows by 25 feet; one insecticide application was made on Sep. 9, 2010. All of the insecticide treatments significantly reduced aphid numbers relative to the untreated control, all insecticides provided statistically similar levels of aphid control. Data provided by Alan Schreiber, Washington Asparagus Commission.

* All foliar applications were made using 20 gallons of water per acre.