Cherries are blooming in Southwest Michigan

No losses to spring freezes are the bright side of a cool, wet spring as fruit moves slowly into spring.

The last weeks continued to be cool and rainy. Highs were in the 50s and 60s and lows in the 30s and 40s. Several more inches of rain resulted in infections for apple scab and mummy berry from wetting periods of 30 hours or more with an average temperature in the low 40s. A dry weekend and a warm Sunday was nice. Hail on April 27, was locally heavy in a band from Lawton to Kalamazoo and caused damage to tree bark in some areas. There is a chance of frost Wednesday morning (May 4) with lows predicted around freezing. Temperatures below 28°F can cause damage in open blossoms. Lower temperatures into the mid-20s would cause freezing injury in most fruit now. There have been no freezes so far this year, but winter injury in many sites and crops is becoming more apparent as plants fail to leaf out normally.

The outlook for the week is for drier weather through Thursday. Highs will be in the upper 50s and lows in the 30s and 40s. The long range outlook is for continued cool and wet conditions. Bloom has begun in sweet cherries. Soils are saturated but some planting and field work has begun on light sandy soils. Soil temperatures are in the 40s. We are falling behind in growing degree days and are now over a week behind normal. Check for the closest weather station to you at: enviroweather.msu.edu. 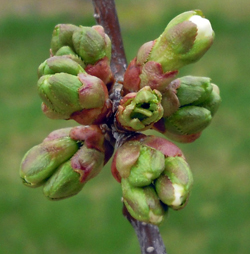 Wet weather has made planting difficult in sites with clay soils. Cool weather has kept insect activity to a minimum. Oriental fruit moth adults where captured Sunday (May 1). With stone fruit blooming and a wet weekend forecast for Mother’s Day, growers will need to protect against brown rot.

Apricots are mainly in the shuck. Bloom is ending.

Peaches are at pink calyx to pink. Leaf buds are showing about a half inch green. Crop potential is still very good. Copper programs to suppress bacterial spot on disease prone sites and varieties are continuing in some area orchards. Oriental fruit moth pheromone dispensers should be out in peach orchard to control the first generation. A few Oriental fruit moth adults have been caught.

Sweet cherry bloom has begun in early varieties and escaped trees are easy to see along the roadsides. Later varieties are at tight cluster. Trees on Gisela rootstocks are at bloom. Open stone fruit blossoms are susceptible to brown rot infection in warmer rains. Wet conditions below 60 are generally not a concern unless wet periods are long or if mummies are in the tree. Temperatures above 70 are optimal for the disease.

Tart cherry buds have burst. Most ‘Montmorency’ are at tight cluster and first white. ‘Balaton’ buds are at first white. There is a wide variation in crop development in tart cherry orchards; a few trees have open bloom.

Apples are at tight cluster and would be damaged by temperatures below 27°F, but temperatures into the mid-20s would be needed to cause significant damage. Temperatures that low are unlikely this week. Early varieties are at pink and may open late this week. Growers have sprayed 2 to 4 times for apple scab. There were several significant scab infection periods in April. Symptoms of apple scab from the April 15 infection period should appear this weekend early next week. Apple scab spore production usually peaks at bloom time so protectant sprays are very important during pink. Growers can use the scab infection tool on the enviroweather website to track infection periods and when symptoms will become visible. Pink is the best time to target rosy aphids in varieties such as Golden Delicious, which are prone to this pest.

Pears are at open cluster and Kieffer pears are blooming. Pear psylla are out and active during the sunny warm periods.

Grape buds are at full swell and color is beginning to show in the buds. Budbreak for juice grapes is expected to occur this week in many vineyards. The historical average date for budbreak in juice grapes is April 27. The latest date recorded by National Grape for budbreak in Southwest Michigan is May 13. Growers should be scouting for cutworms and grape flea beetles. Phomopsis disease pressure is building, with wet weather and temperatures above 50°F. It is important to get fungicide applications on early to control phomopsis infections at bud break. Hail was reported in April 27, in the Lawton and Mattawan areas. 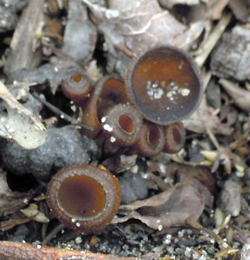 Blueberry fields are saturated and water is standing in many fields. Flower buds are bursting and early varieties are showing very early pink bud. Leaf buds are about 10 mm long and leaves are beginning to unfold. There have been several mummyberry infection periods. Mummy berry trumpets are common and mature, capable of releasing spores. More trumpets are emerging. Growers need to be prepared toprotect against mummy berry shoot blight. Some winter injury is visible in empty flower buds that open prematurely, or other flowers buds that stop growing after the initial bud swell. Flower buds at bud burst should be able to withstand 20°F. Temperatures below 25°F would be necessary to damage the buds during pink bud.

Strawberry flower trusses are emerging from the crown. With the flowers in the ground strawberries can easily withstand temperatures to 10°F. Once the flowers emerge, the critical temperature for freeze damage is 20°F.

In brambles winter injury is visible in many sites especially in blackberries. Many varieties have leaves unfolding. Cane damage to blackberries is common in some sites. New primocanes of fall bearing raspberries are emerging and generally only a few inches high.