The 2013 season provided some pest challenges for Michigan chestnut growers.

Chestnuts around Michigan began breaking dormancy in late April to early May this 2013 season. Cool weather and freezing temperatures in mid-May caused variable damage to foliage and buds, severe in some areas. Damage appeared to be most significant in orchards located further south and further along in their development at the time. In the north, only Nevada, a European/Japanese hybrid known for susceptibility to winter injury, exhibited frosted, expanded leaves and no bud damage was found. Other varieties were still in early bud stages with little to no leaf expansion present in the north. 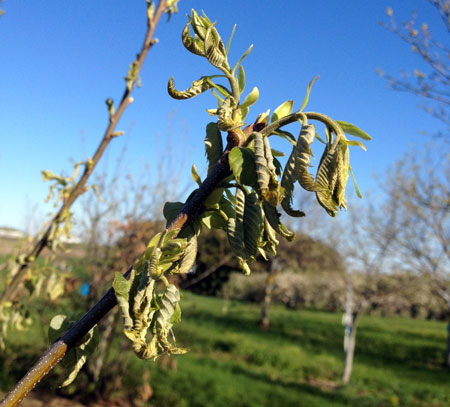 Rainfall during the spring pollination period (late June – early July) interfered with fertilization. Chestnuts are primarily wind-pollinated and rain physically washes pollen from the air and off of male flowers, preventing the majority of pollen from reaching receptive female flowers. Growers reported early on that burs were forming, but had limited or no kernels inside, particularly in orchards with limited pollinizer varieties. Orchards with multiple pollinizer varieties seemed to fare better with higher fertilization rates and nut production. This higher production was likely due to increased pollen availability during the three weeks or so that female chestnut flowers are receptive.

European red mite activity kicked off in late May with adults and eggs visible. Populations expanded slowly over the season with numbers increasing most dramatically in late July and early August and reaching extremely high levels in both untreated and treated orchards. European red mites overwinter in egg-form; growers can locate egg masses in crevices, rough bark, crotches usually in folds of bark inclusion, on branches and in the bud scales with the aid of a hand lens. Summer eggs are found on the leaves along the veins on both sides of the leaf, but mainly on the underside. Eggs are orange-red and resemble turbans. 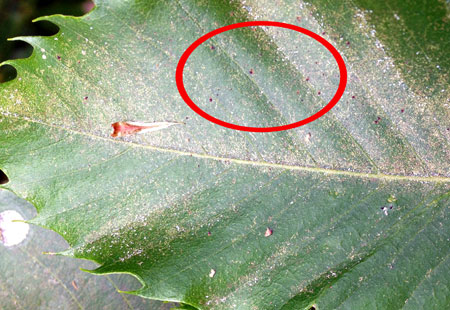 After eggs hatch, nymphs move onto the young leaves and start feeding on the underside; adults are often observed on the upper leaf surface. First generation takes a bit longer to develop – about three weeks – since it has to battle cool temperatures in the early season. Summer generations, driven by the hot and dry weather, complete lifecycles in about 10 days. Under favorable weather conditions – hot and dry – they can have eight or more generations in one season. Adults are often found on the upper leaf surfaces. Damage continues until cold weather kills the adults.

Orchards that battled populations season-long or with high levels at the end of the year should plan to control overwintering populations in the spring of 2015. Dormant or delayed dormant oil applications are the most effective treatment timing to control mites. Summer mite management is based on monitoring and scouting procedure and use of miticides. Limiting the use of neonicitinoids, such as Admire or Provado, or pyrethroid insecticides, such as Naythroid, Danitol or Warrior, may also help decrease mite populations over time as these insecticides are hard on beneficials and can exacerbate mite problems. For more information, refer to the Michigan State University Extension article “Consider early season mite control on chestnuts in high pressure sites.” 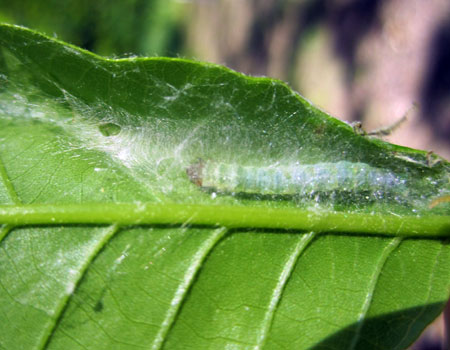 Potato leafhoppers were caught the first week in June this season. Growers reported good control of leafhoppers this season with few managed orchards sustaining substantial damage. Like many plants, chestnuts are sensitive to the saliva of potato leafhoppers that is injected by the insect while feeding. Damage to leaf tissue can cause reduced photosynthesis which can damage the tree, impacting production and quality. Most injury occurs on new tissue on shoot terminals with potato leafhoppers feeding near the edges of the leaves using piercing-sucking mouthparts. Even growers who experienced crop losses due to the frost and freeze events this spring had to treat for potato leafhoppers to maintain tree health. 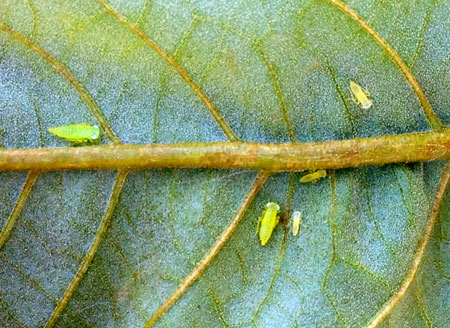 Rose chafers arrived in early to mid-June around the state and were reported in high numbers. Rose chafers are considered a generalist pest and affect many crops, particularly those found on or near sandy soils or grassy areas. The adult beetles feed heavily on foliage and blossom parts of numerous horticultural crops in Michigan and can cause significant damage to chestnut orchards. Rose chafers can be particularly damaging on young trees with limited leaf area. Like Japanese beetles, rose chafers skeletonize the chestnut leaves, but tend to consume larger pockets of tissue with damage similar to caterpillar feeding than the fine, lace-like leaf that results from Japanese beetle feeding.

As always, managing rose chafers proved to be a frustrating endeavor as they reinfest from surrounding areas quickly. This reinfestation is often misinterpreted as an insecticide failure, but efficacy trials have shown that a number of insecticides remain effective treatment options. Adult rose chafer activity subsided early in July. 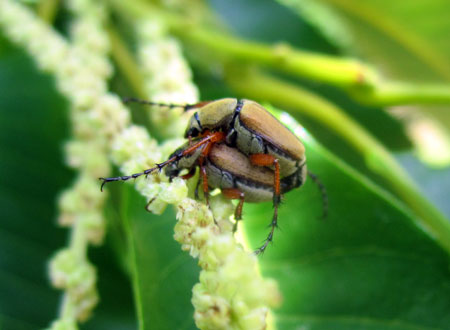 Interested in learning more about chestnuts? Be sure to check out MSU Extension’s chestnut session at the Great Lakes Fruit, Vegetable and Farm Market Expo in Grand Rapids, Mich., Dec. 10-12, 2013.