Michigan chestnut growers should be scouting for chestnut weevil, an important emerging pest of edible chestnuts.

The most important insect pest of chestnut trees in the central-eastern United States is the lesser chestnut weevil (Curculio sayi). Large chestnut weevil (C. caryatrypes) is also an important pest, but is less prevalent. These pests have not yet been a significant problem for Michigan producers, but as acreage expands in the state, growers need to be actively scouting for chestnut weevil.

Large and lesser chestnut weevils are native weevils and are host-specific, only infesting tree species in the genus Castanea (American chestnut, Chinese chestnut, European chestnut and chinquapin). Lesser and large chestnut weevils lay eggs on developing nuts. The larvae feed within the nut, compromising the kernel. If left unchecked, these weevils can infest and destroy the majority of nuts produced in an orchard.

The natural range of these pests mirrors the natural range of American chestnut (Castanea dentata) in the central and eastern United States. When the American chestnut stands collapsed due to chestnut blight (Cryphonectria parasitica), the populations shrunk to small pockets of the United States where chestnuts are present. The prevalence of these pests in Michigan is unknown at this time, but weevil larvae have been found in chestnuts at harvest.

Michigan producers have had very little experience with chestnut weevils and, at this time, no formal research has been done on the lifecycle of this pest in Michigan. However, based on research from Kentucky and Missouri as well as the experience of Michigan growers, we can make some educated estimations about the chestnut weevil’s lifecycle under Michigan conditions.

Lesser chestnut weevil adults likely emerge from the soil during two separate periods in Michigan, once in spring around bloom (May-June) and again in late summer-early fall just before burrs open (September-October). Weevils that emerge in the spring can be observed feeding on catkins. When the catkins decline, the population disappears. It is unknown if these spring weevils return to the soil or move off to feed on other plants. In September-October, a second wave of lesser chestnut weevils emerge. As burrs begin to open, the majority of egglaying occurs for both the spring and fall emerging adult weevils.

Eggs are typically deposited in the downy lining surrounding the nut and hatch in approximately 10 days at which time the larvae feeds on the kernel and develops within the shell. After two to three weeks, larvae chew an exit hole in the nutshell and drop to the soil. The majority of the weevils will overwinter as larvae the first year, pupate in the soil the following fall and overwinter as adults. The total lifecycle is completed in two to three years.

Large chestnut weevil adults likely emerge in August or September under Michigan conditions and begin laying eggs in immature burrs almost immediately after emergence (well before lesser chestnut weevils begin laying eggs). Eggs hatch in five to seven days and the larvae feed and develop within the nut for two to three weeks before chewing a small exit hole and leaving the nut. The large chestnut weevil larvae usually exit the chestnut before the nuts drop to the ground and overwinter in the soil. Pupation and adult emergence takes place the following summer, a small population of larvae may overwinter a second winter before pupation. The total lifecycle is completed in one to two years. 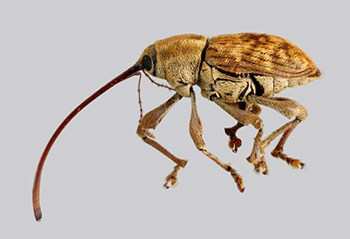 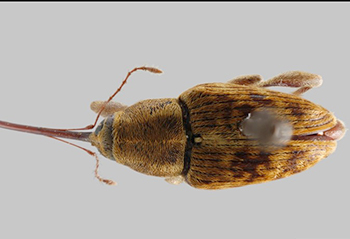 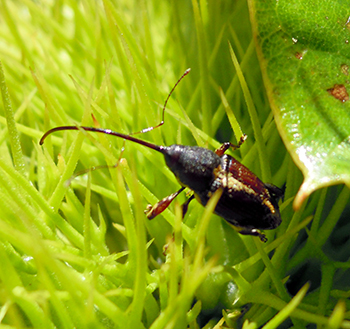 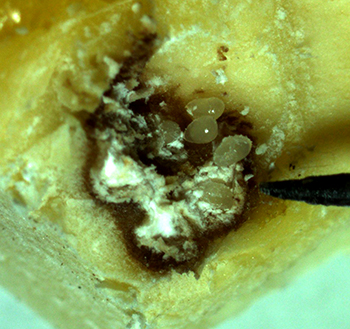 Scouting for chestnut weevils should begin just before bloom. Passive traps, or circle traps on the trunk or pyramid traps at one per acre, can be used to capture ascending weevils. These traps should be set well before bloom occurs and checked twice a week. Scouting for weevils using a limb-tapping technique can also be done. Place a light colored sheet under the limb you are sampling and tap the branch with a padded pole or stick. Jarring the branch causes the weevils to drop from the tree onto the sheet. Weevils “play dead” when disturbed, so don’t be fooled if they all appear dead, they will reanimate within a few seconds.

Chestnut weevils are substantial in size and should be easily visible if present. Growers should sample at least 10 branches per acre. Scouting locations should include both the edges and interior of orchards as well as any hotspots that are identified. 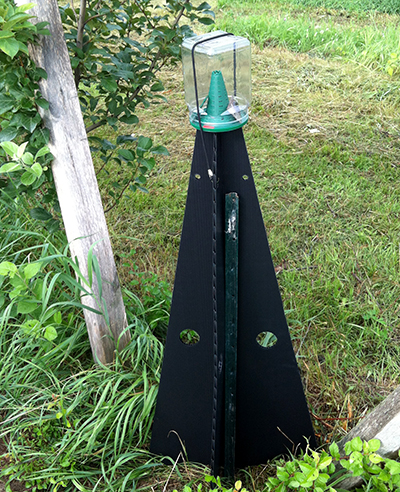 Carbaryl (Carbaryl 4L, Sevin 4F, Sevin 80S, Sevin XLR Plus, Sevin SL) is the only insecticide labeled against chestnut weevils. The manufacturer recommends making four weekly applications beginning in late July to control adults when the burrs are present and vulnerable. However, based on the development of chestnuts under Michigan conditions, growers may want to wait until August to begin applications. Growers will have to carefully budget the three to four applications of carbaryl available as the period of burr exposure is long. Applications should only be made in response to positive identification of the weevil with regular scouting.