Research at Michigan State University has shown that mulch, when properly applied, consistently improves soil moisture availability, weed control and plant growth compared to plots without mulch, even if the plots were kept weed-free. The advantages of organic mulches, such as improved soil properties and ease of application, usually outweigh the advantages of inorganic mulches such as river rock or white rock. When applying mulch, MSU Extension recommends:

Very cold temperatures on May 7–9 caused frost damage to a variety of ornamental, landscape plants and Christmas trees across Michigan. Many trees or shrubs that typically break bud early are susceptible to frost damage. For conifers, this includes black hills spruce, Douglas fir, concolor fir and balsam fir. Among deciduous trees and shrubs, we have seen damage on sycamore, Planetrees, lilacs and honeylocust. A concern for growers is the ability of trees, shrubs and perennials to recover from frost events. In most cases, trees will continue to push new growth, but the overall loss of growth may cause the need for corrective pruning to maintain good form.

Likewise, for homeowners it is important not to panic when they see extensive frost damage to landscape plants. Frost damage can often be dramatic, with entire trees or shrubs covered with brown or black shoots. Remember that vigorous plants have ample energy reserves and will quickly push new growth. For deciduous plants that are prone to late frost damage, we often see plants suffer extensive shoot die-back, but then appear essentially normal by mid-summer. 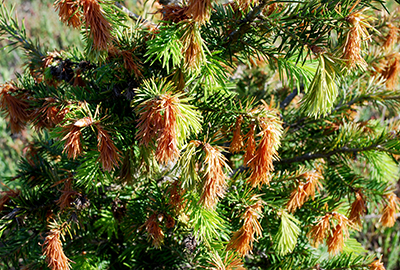 Pine shoot beetle trap logs are used to trick the overwintering adult beetles when they are searching for brood material in spring. Growers set out nice, fresh pine logs, let the adult beetles colonize the logs and then destroy the logs before the new generation of beetles can emerge. It is a balance leaving the trap logs out long enough to be sure you have trapped all the old adults, but then destroying them before any new beetles can emerge.

Due to the cool spring this year, it is better to use growing degree-days (GDD) to target the removal of trap logs from your fields. The trap logs must be collected and either chipped or burned starting at 200 GDD base 50 and finished by 350 GDD50. That window is closing in southern Lower Michigan. As of May 17, there were 365 GDD50 in Allegan, Michigan, and 344 GDD50 in Cassopolis, Michigan. Other areas such as West Olive, Michigan, have 264 GDD50 as of May 17. Current GDD for your area can be found at MSU Enviroweather.

Seedheads are appearing in lawns. Common lawn grasses—Kentucky bluegrass, perennial ryegrass and tall fescue—produce seedheads as do grassy weeds such as annual bluegrass (Poa annua). Seedhead production requires energy from the plant, so it is likely the turf will not only look stemmy due to the seed stalks, but the turfgrass may even lose density. For more information on managing seedheads in lawns, see the MSU Extension articles “Lawns are growing quickly and seedheads are appearing” and “Controlling annual bluegrass seedheads: Spray now or wait?”

Paper wasps and yellowjackets are busy building their news nests. Howard Russell of MSU Diagnostic Services found two nests under the hood of his lawnmower (see photo below). Several people called the lab to report wasps were busy in their yards building nests under handrails and on their kid’s swing sets. Any household aerosol insecticide will control them at this stage of nest development. 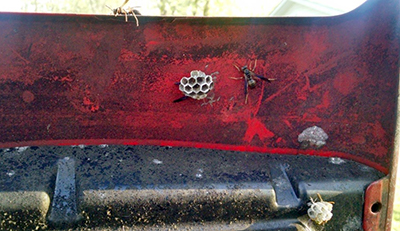