Climate change has been on the news for several years with detractors and supporters providing conflicting opinions on the causes behind the global warming phenomenon. Whatever the cause, climate change is here and it’s affecting Michigan’s fruit industry.

For Michigan, February-March daily temperatures in 2012 are the hottest on record since 1880 according to a report of the NOAA National Climatic Data Center. On March 22, the National Weather Service in Grand Rapids, Mich., reported a high minimum temperature of 56°F, a record minimum temperature that far exceeded the old record of 48°F observed in 1948. Since Michigan’s fruit industry depends in many ways from climate conditions occurring during the winter and spring, these record temperatures may create unexpected problems.

In Michigan, like in many other fruit growing regions, tree fruit and small fruit varieties have been selected over the years to fit the ranges of temperatures suitable to maximize productivity and fruit quality. However, record temperatures like the ones observed on March 21 in west Michigan are turned upside down in the fruit grower’s production calendar.

From apples to blueberries, early growth stages that normally occur during April and early May are all over the place. The current warm spell has advanced the growing season by more than three weeks in our major fruit crops, blueberries, apples and cherries. For blueberries, the “tight cluster” growth stage (see Photo 1) occurred in 2010 around April 28 in the variety Bluecrop. As of March 22, the same stage in the same variety is all over the fields in west Michigan. That is one month in advance. The same can be said for the other fruit crops. 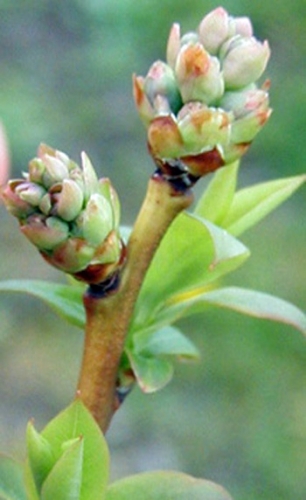 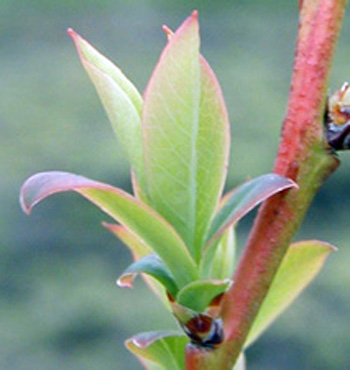 This unusual phenomenon brings a series of challenges for the fruit industry and for all the technical personnel directly associated with fruit production (i.e., agronomists, entomologists, crop consultants, agrochemical suppliers, etc.). Major challenges that we will be dealing with include spring freeze and frost events, lack of pollinators, and early arrival of insect and disease problems.

An immediate concern is spring freeze and frost events. According to Jeff Andresen, MSU agro climatologist, similar warm spells in the state happened in 1945, and in the past each time unseasonably warm temperatures arrived in March they were followed by periods of freezing weather. Andresen said that in west Michigan the number of freezing temperature events from April through June is more than 10 for those months, and low temperatures have been in the single digits in early April.

Blueberry growers need to prepare their contingency plans to deal with possible freezing temperatures during the bloom period. Important elements of their plan include testing and calibration of the sprinkler irrigation system, testing and calibration of temperature recording devises, and water supply. One excellent training presentation on the basics of frost protection for fruit crops has been developed by the University of California, Davis Cooperative Extension.

All major fruit crops in Michigan rely on honey bees for good pollination and fruit quality. But according to Michael G. Hansen, MDARD state apiarist, with such unusual spring, most commercial beekeepers that provide pollination services for Michigan growers are not ready to move their colonies from their overwintering site, Florida and California. This may create problems for all fruit industry. But it may affect most drastically small growers because most of the time beekeepers give priority to large fruit farms over small production units. (See MSU Extension’s Mark Longstroth’s article, “Where are all the bees?”)

Blueberry growers risking freeze and frost damage or lack of pollinators may benefit from the application of gibberellic acid (GA) to supplement the lack of natural pollinators and get an additional protection against freeze and frost damage at bloom time. Eric Hanson, MSU Extension small fruit horticulturist, has shown that application of GA may decrease the impact of low pollination. GA can be applied in a single spray during bloom (80 gram active ingredient per acre) or two 40 g sprays, one during bloom and the second 10 to 14 days later. The commercial formulation of this product is marketed under different names, Several GA products (ProGibb, GibGro, etc.) are labeled for highbush blueberries. GA typically results in greater retention of some parthenocarpic (seedless) fruit that would have dropped and also increases the size of berries without a full complement of seeds.