Here are some guidelines for dealing with insects in your cole crops, which may be a challenge this year due to a cool, wet spring and warm summer temperatures.

In Michigan, the cabbage caterpillar complex consists of the diamondback moth, the imported cabbageworm and the cabbage looper. These are annually present in cole crops, but this year flea beetles and thrips are also occurring in large numbers in certain areas.

Caterpillars on cabbage chew out areas of the leaves, later in the season bore into heads, and increase plant susceptibility to diseases. Thrips are so small that they are easy to miss until the damage becomes severe. Thrips rupture plant cells and imbibe the cell liquid. Flea beetles chew numerous small holes into the leaves and can cause severe damage, especially in the case of seedlings. Management options for all of these pests consist of non-chemical and chemical methods, which should be used in combination and after comparing insect abundance to treatment thresholds.

All of the cabbage complex caterpillars in Michigan have native or imported parasitic wasp natural enemies which can be effective if conserved starting early in the season. One naturally occurring species in our state, Diadegma insulare, is a very effective diamondback moth parasitoid that can kill as high as 50 to 80 percent of the diamondback moth larvae. Minute pirate bugs and predatory mites attack thrips naturally, but they don’t provide adequate control, especially during hot summer periods.

Natural enemy conservation can be achieved by avoiding the use of broad-spectrum insecticides, especially early in the season when pest pressure is low. Selective insecticides, such as Bacillus thuringiensis (Bt) containing products, are safe to natural enemies and therefore recommended for use. Bt products are most effective when applied to small caterpillars and the advantage of these insecticides is that they have a one-day pre-harvest interval. There are Bt resistant populations of diamondback moths, but at this time we have not confirmed any such cases from Michigan. The other two caterpillar species are not known to develop resistance to Bt.

Other options for insecticides that allow natural enemies to survive include products that contain spinetoram, novaluron or methoxyfenozide. Spinetoram has a broad-spectrum knockdown action; it controls multiple growth stages and provides residual control. This insecticide is effective against caterpillars as well as onion thrips when used in combination with a surfactant. Novaluron and methoxyfenozide are both insect growth regulators, which means that they stop insects from developing through their normal life stages. These insecticides are recommended for use on smaller caterpillars. Methoxyfenozide has a one-day and novaluron has a seven-day pre-harvest interval. Thrips numbers can steeply decline after major rain events and can quickly increase during hot-dry spells. Flea beetle chemical control is done with carbamates, neonicotinoids or pyrethroids.

Thrips. Scout plants along field margins where infestations build early. Scout weekly to determine if populations are increasing. Look closely between the leaf blades to find the light yellow nymphs or darker adults. Though tiny, they are visible moving about on the leaf when the leaves are parted. Count the number per plant and note number of leaves per plant to determine if thresholds are reached. The number that constitutes an economic threshold varies with the stage of plant growth, efficacy of insecticide to be used, water availability and health of the plants. A widely used threshold is three thrips per leaf or 30 per plant.

Flea beetles. Scout for flea beetles every day or two, especially while plants are small and unable to tolerate much damage. Flea beetles have a tendency to move into fields very quickly. The beetles are easier to count on plants if the leaves are not disturbed. The threshold is two to five beetles per plant; the lower number applies to seedlings. Cotyledon stage plants are most susceptible to beetles.

Please visit MSU’s Vegetable Entomology’s Cabbage Insect Count web site to get weekly updates throughout the growing season on the number of cabbage pests in a cabbage field in East Lansing, Michigan. 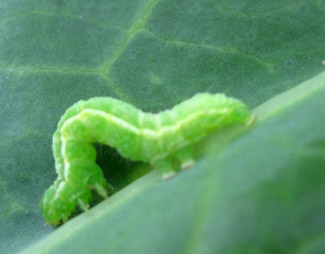 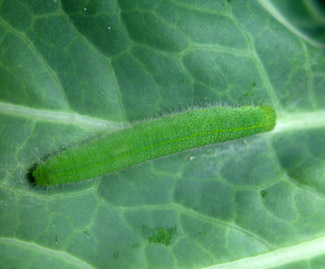 Left, Cabbage looper caterpillars can be recognized by the light stripe on the side of the body and the “looping” motion as they move along the leaf. Right, The imported cabbageworm caterpillar has a velvety look, partly because of the hairs covering its body. The color of the caterpillar matches the cabbage leaf, requiring a trained eye to spot these insects. Photo credits: Alexandria Bryant. 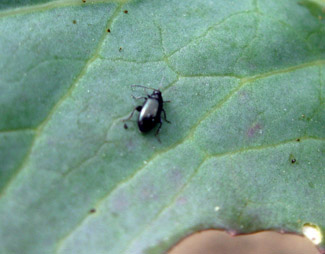 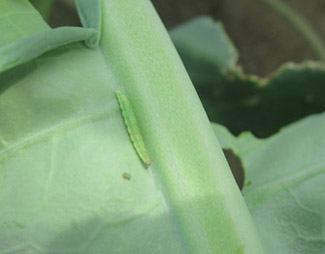