There are two ways to significantly reduce head scab disease in wheat. To help mark the progress of the industry, growers are asked to complete a simple variety survey.

Fusarium head blight, commonly called head scab, is the single most important disease of wheat and one of the most difficult to prevent. The disease leads to bleached spikelets, and infected kernels are often shriveled, chalky or pink. More importantly, the infection can lead to the production of a mycotoxin called deoxynivalenol (DON or vomitoxin). The harvested grain is discounted or rejected where mycotoxin levels are relatively high.

Researchers from around the world have been trying to combat this very difficult disease. In the U.S., following a severe outbreak in 1996, Michigan State University’s Rick Ward provided leadership for the creation of a nation-wide effort called the U.S. Wheat and Barley Scab Initiative. While there continues to be no complete cure, collaborating U.S. researchers have developed management practices and breeding lines that can significantly reduce losses to the disease.

In Michigan, wheat growers have readily adopted the use of a fungicide (Prosaro or Caramba) application soon after wheat heading. This practice, described in “Managing Fusarium Head Blight” by MSU Extension, often reduces both the disease and DON levels by half.

Only in recent years has varietal selection emerged as a second viable strategy for halving Fusarium head blight levels in soft red and soft white varieties acceptable to Michigan growers. This has become particularly evident within the past two years as the results of multiple trials identifying varieties having DON levels at least half that of more susceptible breeding lines.

To gain a sense of the level of resistance in currently grown varieties, Michigan growers are being asked to complete a brief survey to share the variety names of the wheat they planted for harvest in 2016. This survey is being conducted in cooperation with the U.S. Wheat and Barley Scab Initiative, MSU and the Michigan Wheat Program.

There are three ways wheat growers can participate: 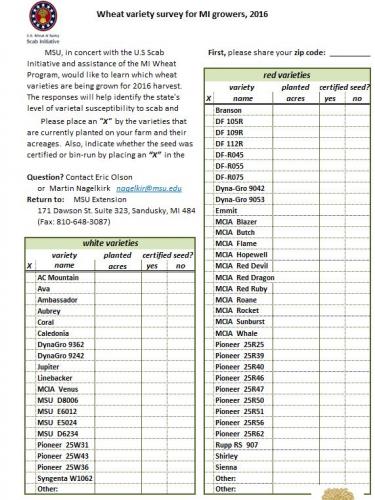 Growers are being asked to share the wheat varieties they grew this season using this survey.