One of the contingencies covered in the drills included fighting fire in different locations on a vessel. It has been shown that commercial fishers who actually operate a fire extinguisher to put out a fire increase their proficiency by three times compared to those who have never operated a fire extinguisher. Local fire departments assisted in the training efforts by allowing commercial fishers to extinguish a controlled fire. Drill Conductor Training courses have many hands-on exercises for commercial fishers as possible to help increase their proficiency in emergency situations.

Most commercial fishers do not wear personal floatation devices (PFDs) because they indicate that they are too bulky to work in and can get entangled in fishing gear. Fatalities that have occurred in the commercial fishery showed that over a five-year period there were 157 drownings related to person overboard and not one was wearing a PFD. During the Drill Conductor Training courses the commercial fishers were shown a variety of new types of PFDs on the market that are comfortable to wear and will not get entangled in fishing gear. Many have now expressed an interest in wearing these new types of PFDs. Commercial fishers now know that the best PFD is the one that they are wearing. 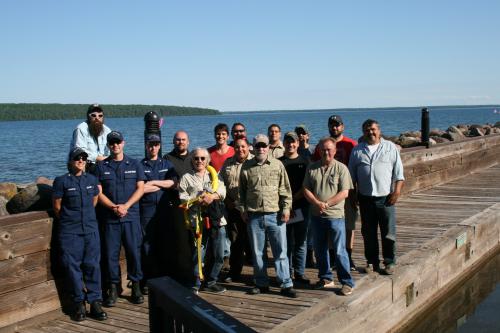 The Drill Conductor Training courses were evaluated by the 77 attendees who rated the training as excellent and indicated the emergency drills on actual vessels helped increase their proficiency should an emergency arise. The courses had representation from commercial fishers from Lakes Superior, Michigan, Huron, and Erie and also included four U.S. Coast Guard personnel needing the training for their jobs.

The success of the Drill Conductor Training courses can also be attributed to the local arrangements that were assisted with by our partners with the Great Lakes Indian Fish and Wildlife Commission, Keweenaw Bay Indian Community, Red Cliff Band of Lake Superior Chippewa, Wisconsin Sea Grant, Wisconsin Department of Natural Resources, King’s Fish Market, Grand Traverse Band of Ottawa and Chippewa Indians, and Bay Port Fisheries.