I received some emails recently from a homeowner in the Monroe, Michigan, area that was concerned about a large Norway spruce in his front yard. The tree had lost some needles and parts of the tree crown were thinning. A tree service inspected the tree and diagnosed needlecast and recommended fungicide treatments and deep-root fertilization. The photos of the tree, however, were not consistent with needlecast.

Needlecast affects older, interior needles, leaving an outer “shell” of unaffected current-year needles (Photo 1). The photos of the Norway spruce, in contrast, showed several years of clearly healthy needles (Photo 2). The homeowner was also concerned about unusual growths he had seen on the tree, so I asked for additional photos. The “growths” turned out to be emerging pollen buds (Photo 3). 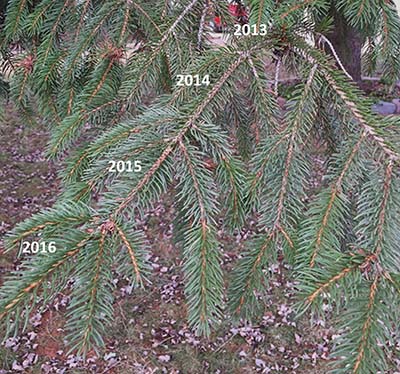 Photo 2. Age classes of needles on spruce trees can be identified by working inward from the most current (outermost) growth. Image courtesy of Jeff Canejo. 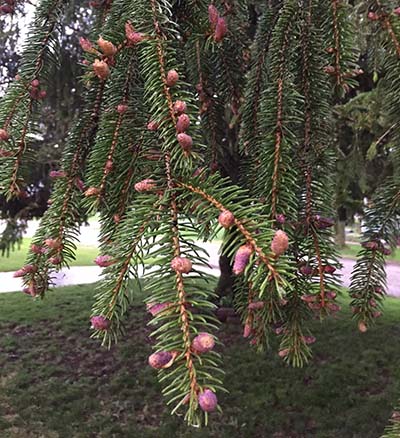 The final group of photos the homeowner sent did provide a cause for concern. These showed galls formed by Eastern spruce gall adelgid (Photo 4). Adelgids are tiny insects similar to aphids. They are sucking insects and result in the formation of cone-like galls on tree shoots. Infestations of gall adelgids can lead to gradual tree decline and reduced aesthetic appearance. Depending on the degree and frequency of spruce gall infestation, control may be warranted to protect tree vigor and aesthetics. Michigan State University Extension suggests that fall is often the best time for gall adelgid control. 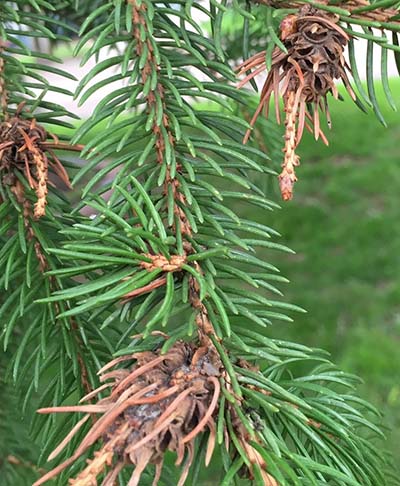