Consumer demand for goat cheese is on the rise

Dairy goat producers can add significant value to their operations by taking the next step and processing some of their milk into cheese. According to the National Agricultural Statistics Service (NASS), Michigan has over 1,000 reported milk goat operations that raise breeds like Alpine, LaMancha, Nubian, Oberhasli, Saanen and Toggenburg. A doe from one of these breeds can produce more than 2,000 pounds of milk per year that can potentially be turned into delicious cheese.

According to the Agricultural Marketing Resource Center, in the past decade goat cheese has been one of the fastest growing cheeses in the specialty food product market. No longer just found in gourmet food shops, it is available in local grocery stores, supermarkets and through buying clubs. A hot trend on restaurant menus, goat cheese can be found on pizza and salads or even used in desserts.

One of the most popular goat cheeses is chevre, which is a fresh, soft cheese somewhat similar in texture to cream cheese. It can be purchased as a spread or in logs and often has a variety of flavorings added like herbs or nuts. It has the appeal of having half the fat and cholesterol and one third less calories than cream cheese.

Goat cheese has a characteristic flavor to it that comes from caprylic, capric and caproic fatty acids. These fatty acids give goat cheese its tangy flavor. The hormonal influence of the doe and also the diet of the doe can influence the flavor of the milk and the resulting cheese.

Goat cheese must be made in a licensed facility from milk produced in a licensed Grade A Dairy. Pasteurized milk must be used for production of fresh cheese like chevre. Raw milk may be used to make cheese as long as the cheese is aged at least 60 days before being sold.

Sue Spagnuolo launched Dolce Vita Goat Dairy from Greenbush Farms in St. Johns, Mich., in 2009. She currently produces about 75 pounds of fresh chevre each week that she sells through area stores and farm markets. Her cheese is also enjoyed by the students at the Michigan State University Dairy Store. One of her flavored creations called “Buck Snort” is a spicy blend of the cheese and locally grown hot peppers.

A master cheese maker for a number of years, Rusty Plummer began making and marketing goat cheese this year from Hickory Knoll Farms Creamery in Onondaga, Mich. Rusty makes both fresh chevre and French style Tomme cheeses that are favorites at many farmers’ markets around the state, gourmet food stores and restaurants. He continues to increase cheese production that utilizes the milk from the farm’s herd of 160 dairy goats and is expanding distribution into new areas. 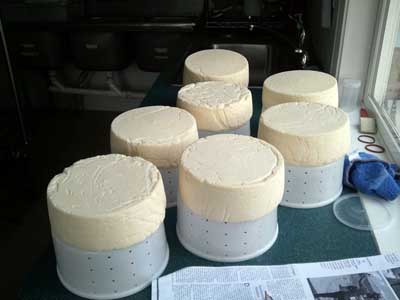 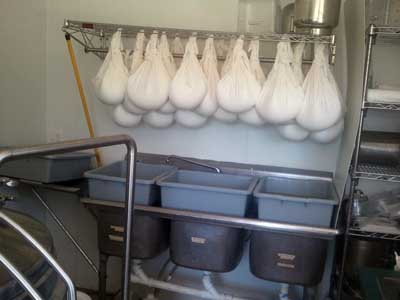 Goat producers who are interested in developing value added products like goat cheese can contact the MSU Product Center for assistance. Innovation counselors working across the state can provide assistance in business planning, marketing and navigating the regulatory maze in launching a new product.