American brown rot (ABR) is caused by the fungus Monolinia fructicola. This fast-growing fungus is an important pathogen on cherry (sweet cherry in particular), peach, apricot, nectarine and plum. The fungus attacks fruit, blossoms, spurs and shoots, and under ideal infection conditions, the fungus can rot individual cherry fruit within 24-hours (see photo). The fungus sporulates from infected fruit, which provides increasing inoculum for further infections. Under ideal conditions, sporulation can be initiated within three days post-infection. American brown rot causes fruit rot before and can continue rotting the fruit after harvest. These pre-harvest infections greatly reduce the quality and quantity of the yield, particularly in heavily bunching sweet cherry varieties.

Factors that contribute to American brown rot infection include warm, wet conditions as the fruit begin to ripen and increase in sugar content. The optimal temperature for infection is between 67°F and 77°F, and spore production is greatest between 59°F and 74°F. Although fruit injury (cracks or bird pecks) may lead to increased infection, the American brown rot fungus can cause infections when no wounds are present. Other factors that influence increased infection are fruit-to-fruit or fruit-to-branch contact on trees.

The most important issue in American brown rot control of fruit infection is fungicide coverage of fruit surfaces. Because the fungus is a prolific sporulator, each infected fruit is a ready source of large numbers of new spores. As stated above, fruit infection to sporulation can occur in as little as three days; thus, it is critical to keep fruit surfaces covered when conditions are optimal for infection as they have been for the past one or two weeks.

Although the strobilurin class can minimize infection, the SI class of fungicides is the most effective fungicide group for American brown rot control. There have been increasing concerns about development of strains of the fungus with resistance to SI fungicides. However, growers should remember that we conducted a survey of 21 sweet and 9 tart cherry orchards located throughout the state in 2008, which revealed no SI-resistant strains. Although there was some evident shifting in the populations towards reduced sensitivity, we are still confident that SI fungicides have activity against the American brown rot pathogen.

Last year, we examined isolates from five peach orchards in Southwest Michigan, and we learned a few important facts from this work: (1) only 1 of 50 Monolinia isolates was resistant to SI fungicides, and (2) many of the isolates were completely sensitive to SI’s. These observations indicate that almost all of the American brown rot infection observed in the field was attributed to deficiencies in fungicide coverage and not to SI resistance or loss of efficacy with this class of fungicides.

SI fungicide sensitivity shifts work in a quantitative manner. Thus, if there is decreased sensitivity of the fungus to SI’s, these isolates can be controlled using higher rates of the fungicide. Beginning last year in Michigan, we obtained a Section 24(c) label for Indar allowing the use of increased fungicide rates of up to 12 fl. oz per acre per application. The normal field label rate is 6 fl. oz per acre. (There is still a maximum seasonal allowance of 48 fl. oz per acre.) The 6 fl. oz per acre rate should provide excellent American brown rot control, provided fruit are effectively covered during the current and upcoming warm, wet American brown rot-conducive weather. However, growers that are concerned with possible population shifts in sensitivity could increase the rate of Indar used to 8 fl. oz per acre. This is a 33 percent increase in fungicide rate and should be effective in controlling any shifted fungus strains. This 8 fl. oz rate would still allow up for up to six applications of Indar per season.

Other possibilities for fungicide resistance management at this time of year include rotation with other modes of action, such as Pristine or Gem; the strobilurins receive a “good” rating in the management guide, so growers should be aware that they have some efficacy against American brown rot but not the best class of chemistry. The most important factor in limiting further shifting in American brown rot populations is to effectively kill the fungus in orchards, limit new infections, and to limit growth of the fungus which could allow mutation to SI resistance. Growers should also go slow when spraying for American brown rot and do their best to put on fungicide applications when the winds are low as coverage is crucial for controlling this fungus. 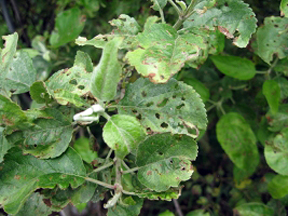