The 2015 weather was especially favorable for downy mildew on hop, and growers should expect problems with this pathogen to continue into this season. Disease symptoms include stunted basal shoots, sidearms and terminal buds that appear yellowish, bines that fail to climb the coir, and yellow to brownish leaf lesions. Disease signs include a gray to brown, fuzzy appearance on the underside of infected leaves due to the pathogen reproducing.

The downy mildew pathogen survives Michigan winters in dormant hop buds or crowns and then moves into the expanding basal shoots in the spring. The downy mildew pathogen reproduces via spores on the underside of infected leaves. These spores move to healthy hop buds, growing points, cones and leaves via wind. If the terminal growing point becomes infected, then the pathogen becomes “systemic” and can grow down through the plant toward the crown where it persists in the buds and crown. Mild to warm temperatures of 60-70 degrees Fahrenheit are optimum for the pathogen along with at least 1.5 hours of free moisture from rain or dew.

Although our temperatures have been cool recently, we’ve had rain and plenty of free moisture. When the free moisture persists for 24 hours or longer, infection can occur at low temperatures of 40 F or higher. With this in mind, an aggressive spring control program is warranted since the most popular hop varieties being grown are susceptible to this destructive pathogen.

For 10 years I’ve worked to help Michigan cucumber growers manage downy mildew on their crops and my lab has tested dozens of products each year since 2005. Since the hop downy mildew is a “sister species” to the cucumber downy mildew, I’m basing my current hop recommendations on my experience with this closely related pathogen. I’ve also worked extensively with other downy mildew pathogens that cause damage to impatiens, coleus and basil.

I like to think of the registered fungicide tools as a “team” with each product playing a particular role. Some members of the fungicide team are “starters” and make up the “A” team, whereas other fungicide team members can offer a moderate level support and are members of the “second string” or the “B” team. A strong program can consist of products from both the A and B teams as long as a program is put together carefully with a sharp eye to those conditions that favor downy mildew (prolonged wet and humid weather). Use A team products when the disease pressure is high or when the weather favors disease. The B team products can be used when disease is absent/low or when the weather is hot and dry. Alternating A team products with B team products is also an approach that can be used during periods of moderate downy mildew pressure.

What about all of the other fungicides that are registered for hop? Where do they fit in a downy mildew program? Some fungicides registered for hop target only powdery mildew, and that is a completely different problem from downy mildew. Although the Aliette program has been used successfully for downy mildew in the Pacific Northwest, I’m not convinced it can stand up to the intense and season-long disease pressure that hop growers experience in Michigan. Phostrol has similar activity to Aliette. My concern is that neither of these products has proven helpful for limiting downy mildew on cucumber and is the primary reason I hesitate to recommend them to Michigan hop growers. Overall, the strobilurin fungicides such as floxystrobin (contained in Luna Sensation) and pyraclostrobin (contained in Pristine) have not been good downy mildew fungicides in other crops. 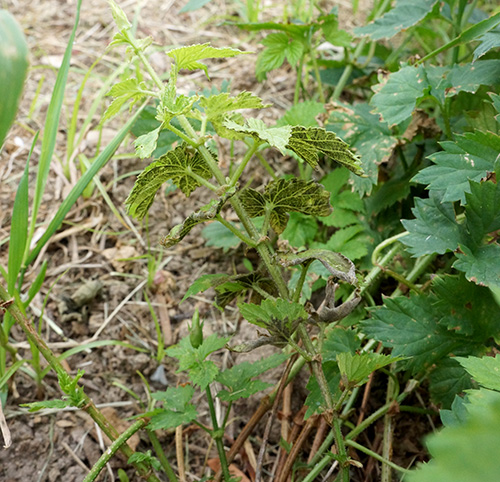 Gray to brown, fuzzy appearance on the underside of infected leaves due to the pathogen reproducing. 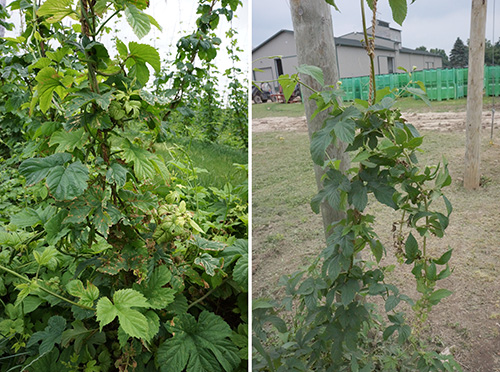 Lateral (left) and terminal (right) buds infected with downy mildew. Infection of the terminal bud may cause a trained bine to fall off the coir. 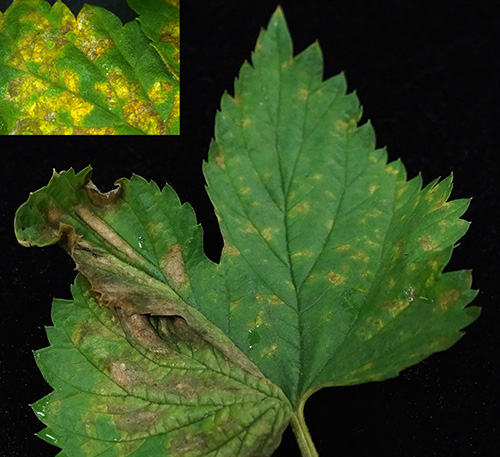