Grubs were found around the roots of dying arborvitae shrubs in a west Michigan nursery field.

In the last two weeks (as of June 6, 2013), quite a few arborvitae shrubs, 1 to 3 feet tall, have turned brown in some nursery fields in west Michigan. The dying shrubs are scattered about the field, but tend to be more in some areas than others. Examination of the shrubs and roots reveals many C-shaped white grubs in the root system and girdling of the trunk and largest roots just below the soil line. The grubs have consumed most of the smaller roots and also eaten the bark off the larger ones. As a result, many of the shrubs are stunted and some have died, unable to uptake enough water to be sustained. 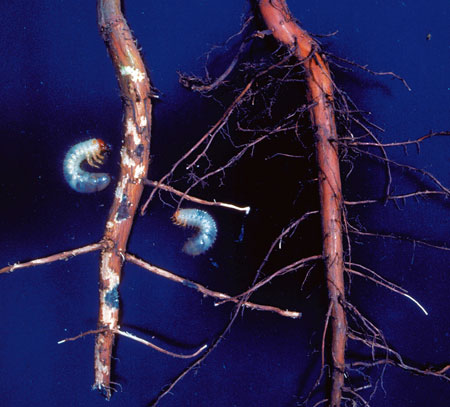 In west Michigan, it is usually European chafer grubs that cause this problem. The light brown beetles – 0.5 inches long – fly in late June or early July. They deposit their eggs in the soil around shrubs. The eggs hatch in late July or early August and the young grubs begin feeding on shrub roots, growing to a length of 1 inches long by late September. Heavy root feeding in September, October, March and April can cripple nursery shrubs.

Although most nursery fields do not have a problem with grubs, some arborvitae and spruce fields do. This is especially a problem following a dry summer because the shrubs are already compromised with a reduced root system.

As recommended by Michigan State University Extension, in order to prevent future grub problems, these nursery fields should be treated with Discus, Marathon, Imidacloprid 2F Nursery or any another product labeled for tree and shrub production that contains imidacloprid. Apply one of these products at the rate on the label for grub control and apply it in June or July. Imidacloprid works best when watered-in immediately after application. If irrigation is not possible, apply the insecticide just before it rains.