Controlling wasps in yards and structures

Calls to the lab this past week have been dominated by those seeking advice about eliminating wasp nests from their homes and yards. Killing off a wasp nest is tricky business because as many of us know, the occupants of these nests tend to resist any effort to kill them off by stinging the daylights out of those attempting to do so. Wasps that are most problematic this time of year belong to the family Vespidae. Though many species of vespids lead a solitary lifestyle and rarely cause us problems, yellow jackets, bald-faced hornets and paper wasps are social insects that live in large colonies. They construct their nests in the ground, in trees, under eves and inside wall voids and attics. Nest construction starts in late spring and continues throughout the summer. The last brood raised includes males and next year’s queens and due to the importance of these reproductives, the worker wasps become very protective and aggressive toward those who venture too close to the nest this time of year.

In northern latitudes such as Michigan, social vespids nests are abandoned in the fall. After the new queens leave, all the workers eventually die due to starvation and cold weather. After mating, the queens seek protected sites in which to spend the winter; they are the only ones that survive the winter. The following spring they emerge from their long winter’s rest and search for a suitable nesting site and begin construction of new nests. Old nests are never reused, but a favorable nesting site may be selected year after year. During August the colony reaches its maximum size of worker wasps. The maximum size depends on the species: paper wasps may only produce a few dozen workers, while colonies of yellow jackets may reach one or two thousand wasps. For those attempting to kill off a wasp nest, size certainly does matter.

Another important consideration when contemplating whether to eliminate a wasp nest is its location. Nests located in out of the way sites that are not likely to be disturbed can be ignored since they are going to die out anyway later in the year. Small exposed paper wasp nests are easily controlled by aerosol wasp sprays that produce a concentrated stream of juice that has a range of 15 to 20 feet. Paper wasps do not cover their nests in a paper mache envelope like those of yellow jackets and bald-faced hornets and their brood cells and workers are exposed and vulnerable. Simply point the nozzle at the nest, shoot and watch ‘em die.

The larger nests of yellow jackets and bald-faced hornets that are protected by a paper mache envelope are more challenging and best left to pest control professionals. But if you are bound and determined to try yourself, then in addition to nest location, your speed and agility should be honestly evaluated. The slow and clumsy should seriously reconsider hiring the services of a pest control company. No attempt should be made to kill a nest that is located high in the upper branches of a tree if you think a ladder will be required to reach the nest. For reasons that should be obvious, a nest full of angry wasps and a fool on a ladder is a potentially dangerous and life threatening combination. If the nest is located close to the ground in a tree, shrub or on a building, then you may have a fighting chance to survive the experience. It is very important that an escape route be planned and cleared of any obstacles before spraying the nest as one will need to quickly vacate the area after the spray is applied. If the nest is located in an area where there is lots of foot traffic, like next to a city side walk, then the area should be cordoned off and would be passersby should be redirected away from the area (though many may prefer to watch to see if you get stung or not). Clothing should also be considered. Again, for reasons that should be obvious, shorts, tank tops and sandals should be exchanged for jeans, shoes and socks, a hooded sweatshirt and possibly leather gloves.

The best time of day is early morning when most of the wasps will be inside the nest and activity is at a minimum. I recommend having two cans of aerosol wasp spray at the ready. The first stream of spray should be directed at the main opening at the bottom of the nest and keep spraying this opening for at least 10 seconds then spray other openings that may be present on the sides of the nest. Spray the openings for as long as possible, and then quickly leave the immediate area via the predetermined escape route. Watch the nest and if activity persists throughout the day, hit it again the next morning following the procedures outlined above. Once activity has tapered off and most of the wasps are killed, knock the nest down with a rake or other long-handle tool, break it apart and saturate the pieces with spray.

Ground nesting yellow jackets are often discovered, sometimes painfully, while mowing the lawn or weeding gardens and flower beds. Ground nests are easily controlled with a single application of an insecticidal dust directed at the nest opening. Insecticidal dusts work well in these cases because the wasps pick the dust up as they enter the nest and carry it to the core of the nest. This contaminates the entire nest and soon all the wasps will die off, normally within one or two days. Again, early morning is the preferred treatment time and the precautionary measures outlined in the above paragraphs should be followed.

Pour about a quarter cup of Sevin 5 Garden Dust in a disposable paper cup and approach the nest in a nonchalant manner. I believe wasps can sense bad intent, so try to act like you are just strolling by, and then quickly dump the cup directly in the opening and move away from the nest with great haste. If this is done correctly, white dust covered wasps will quickly issue from the opening and fly off to meet their fate. Don’t cover the opening with soil or a rock, leave it open so the wasps can enter and leave as they please. Throw the paper cup into the garbage can.

The most challenging of all social vespids to get rid of are those that construct concealed nests inside walls, attics and other areas inside homes and structures. Wasp sprays are seldom effective against these nests because the nest is often located some distance from the entrance and the spray never reaches the core of the nest. Insecticidal dusts are very effective when blown into the nest opening, but the most widely available dust, Sevin 5 Garden Dust, cannot be legally used in structures because “structures” is not listed on the label as a approved site for application. Sevin 5 Garden Dust can be only legally applied to turf and plants growing outside.

If you discover yellow jackets nesting inside your home, you can choose to ignore it or call a pest control company to destroy it. Never plug the outside opening of these nests because this will force the wasps to chew their way into the interior of the house and this is never a good thing. 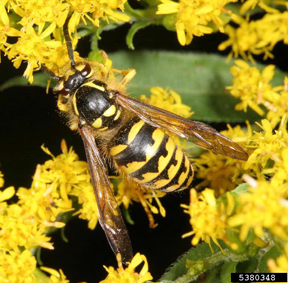 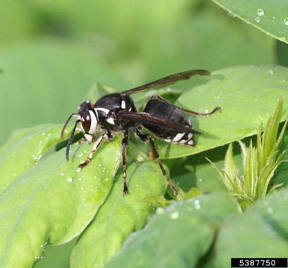 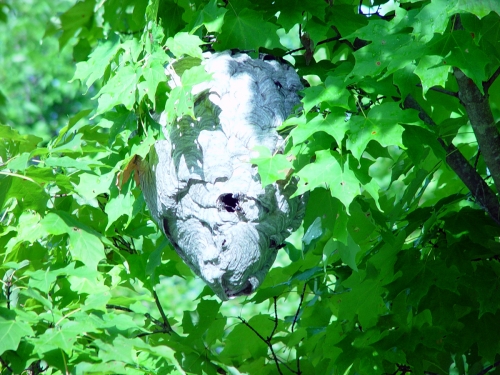 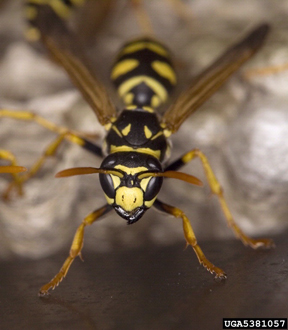 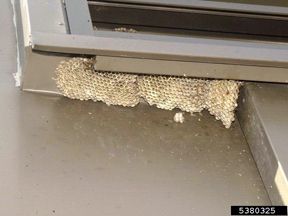 My neighbor took this picture of a hole under his siding that yellow jackets were using as an entrance to a nestthey had built inside his walls. 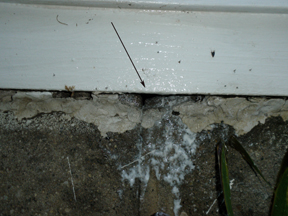 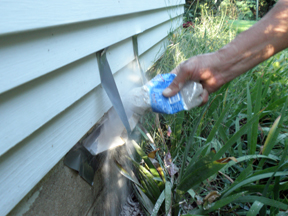 Although highly effective, Sevin 5 Dust cannot be legally used to controlled wasp nests in or on a structure. My neighbor’s friend didn’t know this. He filled an empty water bottle with the dust and then blew into the nest opening. The colony appeared dead that day and no further activity was seen around the nest opening. Photographer’s name withheld at her request. Pictured right, we see that by placing the bottle opening over the nest opening and giving it a hard squeeze, my neighbor’s friend violated two Michigan pesticide laws. First, he put an insecticide into a container that was not manufactured for the intended purpose of applying an insecticide and second, he applied an insecticide to a structure that was not labeled for this use.