In the Midwest, angular leaf spot (also called bacterial blight) is the only reported strawberry disease caused by a bacterium, namely Xanthomonas fragariae. This bacterium has been hitchhiking around the United States on strawberry planting material, since it was first reported in Minnesota in 1960. Although the disease has not been a major problem, it can occasionally become serious. Economic damage is mainly due to blackening of berry stem caps, which mars the appearance of berries. However, severe leaf spotting can also result in premature leaf drop which may affect plant vigor and yield. Among strawberry cultivars, Allstar, Redchief, Glooscap, Kent, Lester, and Lateglow are known to be fairly susceptible.

Typical symptoms of angular leaf spot are small, angular water-soaked spots on the lower leaf surface. Spots may coalesce resulting in larger lesions and necrotic areas. On the upper leaf surface, the lesions look like irregular reddish-brown spots and could easily be mistaken for scorch. It is important, therefore, to inspect both the upper and lower leaf surface. Angular leaf spot lesions are distinctly angular and translucent when the leaf is held up against the light, whereas scorch lesions are more rounded and not translucent. Under humid conditions, a shiny or slimy bacterial exudate can be seen on the lesions on the lower leaf surface. The exudate eventually dries out into a scaly, whitish film. Heavily infected leaves may die, especially if major veins are infected, and the infection may even become systemic. The pathogen can infect all plant parts, except berries and roots. However, berry stem cap infections can be serious, resulting in blackened caps and unattractive fruit.

The bacteria overwinter in old infected leaves and crowns. Primary infection of new growth in the spring occurs by rain or irrigation water splash. The bacteria enter plants through wounds or by actively swimming into natural plant openings (such as stomata, the plant’s breathing pores) aided by dew, rain or irrigation water. Development of the disease is favored by moderate to low daytime temperatures (around 68ºF), low nighttime temperatures (near or below freezing), and high relative humidity. Long periods of leaf wetness due to heavy dew, irrigation, or prolonged rains also favor disease. Young, vigorous leaf tissues are more susceptible to the disease than older leaves.

Angular leaf spot can be managed by using clean planting material, adequate plant and row spacing, and removal of infected plant debris after harvest. If leaf spots are common during fruit development and the weather is conducive, there is a risk of berry stem cap infection. It is therefore important to protect the berry stem caps from infection by applying protective sprays. Copper products, such as Kocide and Cuprofix, applied on a regular basis are the most effective products for control, but care has to be taken to avoid phytotoxicity, which manifests itself by purplish discoloration on leaves. Adding lime as a safener is recommended, particularly since the cool, slow-drying conditions that promote the disease also promote copper uptake by the plant. 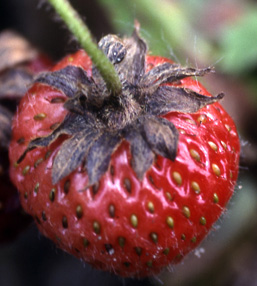 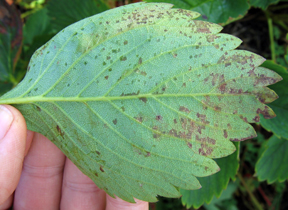