The corn flea beetle is a small, black beetle that feeds as an adult on a variety of grasses, including sweet corn. Feeding by corn flea beetle produces linear scars along the leaf. Usually corn flea beetles do not directly damage corn. They do, however, vector the bacterial disease, Stewart’s wilt. This disease can cause wilting, stunting, and reduced stand and yield in sweet corn. 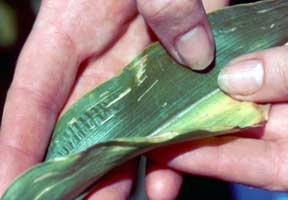 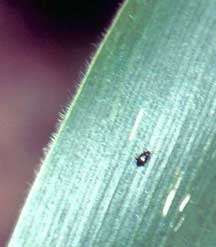 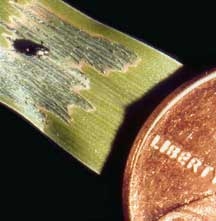 Corn flea beetle on leaf next to penny.

The Stewart’s wilt bacterium lives in plants and in the gut of flea beetle. Flea beetles acquire the disease when feeding on a diseased plant. Infected flea beetles, in turn, infect new plants by feeding on them.

Corn flea beetles survive the winter as adults hidden among leaf litter and debris in ditch banks, hedgerows and other areas bordering fields. Some beetles that emerge in the spring may carry the Stewart’s wilt bacterium in their guts, having become infected the previous season. Wild grasses may also harbor Stewart’s wilt, but whether they are an overwintering source of the pathogen, is not yet known.

If growers are planting more tolerant varieties, or if they are growing corn in areas that do not usually experience problems with Stewart’s wilt, scouting fields for corn flea beetles and feeding damage and applying a foliar insecticide when needed may be the best option. Field should be scouted two to three times per week, especially near the field edges, from germination until the 7-leaf stage. Flea beetles are best observed on a sunny day with little wind (they hide in the corn plant if it is cloudy, cold or windy). The treatment threshold is 6 beetles per 100 plants for susceptible varieties and 2 beetles per plant in combination with feeding damage on 25 percent of plants for resistant varieties. A number of foliar insecticides are registered and are effective against corn flea beetles (see Bulletin E-312: 2007 Insect, Disease and Nematode Control for Commercial Vegetables). Keep in mind, however, that the corn plant is growing rapidly early in the season and any new growth since the last application is not protected. In addition, flea beetles are very mobile and may move into the field from the borders after the application and feed on the unprotected foliage.

By time the corn plant reaches the 7-leaf stage corn flea beetle control is no longer needed. Although flea beetles may still feed on the corn and may still infect it with Stewart’s wilt, the plant is large enough to tolerate the infection without any damage to yield or quality.

Profile of a planting-time pest: Seedcorn maggot in vegetables