There is considerable interest in maximizing corn yields by combining new hybrids with improved production practices. In 2015, Michigan State University Extension and DEKALB/Asgrow brands of Monsanto Company are testing two modern, semi flex-ear-type hybrids, DKC49-72RIB and DKC50-84RIB. These two hybrids are tested at two-row spacings of 20 inches and 30 inches, three populations of 30,000, 36,000 and 42,000 per acre, and two nitrogen (N) rates of 120 and 240 pounds N per acre. The experiment is located in Mason, Michigan, and the treatments were replicated three times. The overall objective is to find how these hybrids will interact with non-limiting plant populations and N rates to produce the highest grain yield per acre. The 20-inch row spacing was included to provide a more desirable geometric spacing for plants at high populations. The trial was planted under ideal weather conditions on April 27, 2015. All plots received 25 pounds N per acre at planting. The balance of N was sidedressed as liquid N (28 percent) injected on June 2.

This year, the site has received excess rainfall in June and early July, raising concerns about potential N shortages, particularly at low to medium application rates. Corn at the V7-V8 stage looked healthy with no visual differences in leaf color between the high and low N treatments. No early firing was noticeable. The Minolta SPAD 502 Chlorophyll Meter is sensitive enough to detect small differences in leaf greenness. The leaf greenness (SPAD 502 meter value) as affected by the N rate is discussed in Part 1 of this article series.

The chlorophyll meter measures the leaf chlorophyll content and gives a numerical value that is closely related to the leaf greenness, crop N status and potential photosynthetic activity. Most of the leaf N is contained in the chlorophyll molecules. Ten readings were taken per treatment at the V7-V8 stage. Each reading was taken from the most recent fully expanded leaf at a point halfway between the leaf collar and leaf tip. Based on MSU N fertilizer recommendations, the high N rate (240 pounds per acre) is considered an adequately fertilized treatment.

The relative leaf greenness at the low and high nitrogen rates is shown in Figure 1. Leaf greenness increased with N rate in both hybrids. At the high N treatment, the leaf greenness of the two hybrids was strikingly similar at V7-V8 growth stage. 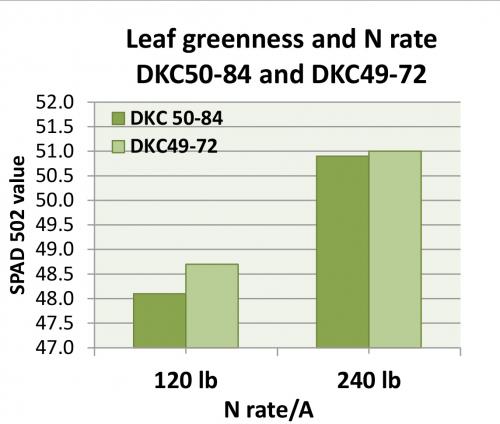 The N sufficiency index for the low N treatment was 95 percent in DKC 50-84 and 96 percent in DKC49-72 (see table). Based on previously published literature, these sufficiency indices suggest that at this specific site, the corn in the low N treatment is not seriously limited in N. In this study, the chlorophyll meter was used solely to compare the relative leaf greenness of different treatments and not to determine any rescue N needs.

Corn and soybean harvest: Make sure to calibrate your yield monitor and get paid for it!

Fertilizer prices slightly higher than in 2014