Learn about the advantages and disadvantages of several options for managing corn residue this fall in preparation for soybean planting.

The quantity and quality of corn residues have increased in recent years. The quantity has increased due to higher planting populations. The use of foliar fungicides and incorporation of transgenic insecticide traits have increased stalk quality and reduced decomposition rates. As a result, high levels of corn residues remain on the soil surface and adversely affect the performance of no-till planting equipment. This has caused some soybean producers to revert back to tilling their corn stalks prior to planting soybeans.

Tillage is one option for managing corn residue. The first advantage of tillage is that some of the residue will be incorporated into the soil where soil microbes will increase decomposition rates. Another advantage is that less of the residue remains above the soil surface to delay soil warming and interfere with planting operations.

However, tillage has some disadvantages. Tilling the field increases production costs. According to estimates from the University of Wisconsin, each tillage pass costs $7 to $10 per acre in fuel, depreciation and labor. Depending on the intensity of the tillage operations performed, tilled soils are also more susceptible to wind and water erosion. If you have fields that have been designated as highly erodable land (HEL) by the USDA-NRCS, you should make sure that your tillage operations are consistent with your conservation plan to protect your eligibility for USDA-FSA programs.

An alternative to tilling the soil is to process the residue with your corn head at harvest. Decomposition rates will be significantly increased when the leaves and stalks have been crimped, chopped or crushed at the corn head. There are two main options for processing corn stalks with the corn head. The first option involves the use of knife-to-knife or tapered snapping rolls. There is a wide variety of snapping rolls available. Some will split, crush and crimp the stalks and others will chop the residue into small uniform pieces.

The second option for processing corn residue at harvest is to use chopping corn heads equipped with shredders underneath the head. According to Paul Jasa, agricultural engineer at the University of Nebraska, this technology has some disadvantages. Chopping corn heads weigh more, cost more and require more horsepower to operate. They also over-process the residue increasing the potential for wind and water movement. The over-processed residue is also more likely to form a dense mat which may delay moisture loss and soil warming in the spring.

Producers should also consider leaving more of the stalk standing after harvest. Paul Jasa recommends leaving stalks 12 to 18” tall when the succeeding crop will be planted between the corn rows without tillage. The taller stalks will increase air movement down the row and increase decomposition rates. If the planting equipment is configured properly, the coulters, openers, gauge wheels and press wheels will pass between the old corn rows and will not have to contend with the standing stalks. However, the taller stalks may catch on planting equipment in the spring. (See Photo 1, below) 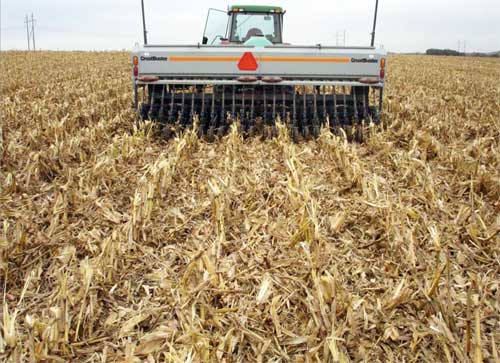 There is a theory that fall applications of nitrogen will increase stalk decomposition rates. The theory is based on the process of nitrogen immobilization. Corn stalks have a very high carbon to nitrogen ratio so they are an excellent source of food and energy for microbes. However, the low nitrogen content may limit microbe population growth as nitrogen is required to build new cells. If additional nitrogen is applied in the fall, microbial populations and residue breakdown could potentially increase. Research has not shown this to be the case in the northern Corn Belt. Low temperature is the limiting factor to microbial decomposition and not soil nitrogen. Therefore, fall applications of nitrogen fertilizer are not recommended.

Harvesting the residue as a biofuel crop or for livestock feed effectively solves planting equipment challenges and provides additional income. However, it exposes the soil to wind and water erosion and removes essential crop nutrients and carbon which is critical to maintaining soil quality and productivity. Livestock producers have the ability to replace these nutrients through manure applications. Cash crop producers can replace the nitrogen (17 lbs./ton), phosphorus (4 lbs./ton) and potassium (50 lbs./ton) removed in the residue by purchasing and applying commercial fertilizers. Replacing the carbon removed in the residue without manure applications is much more difficult.