Cowparsnip is a common Michigan plant that blooms in early June and is often mistaken for giant hogweed.

As June warms the countryside, one plant is growing rapidly, blooming and attracting unwanted attention. Cowparsnip has had the bad luck of looking very much like giant hogweed. Many people have seen and read the evils of giant hogweed and do not want to share their property with it. When a plant appears in an untended area and has a close resemblance, people are concerned.

Cowparsnip is currently blooming in southern Michigan and making a show of itself with its large leaves and white flowers. Giant hogweed is a rare plant that you are unlikely to encounter. Let’s compare the pretender to the real thing and save ourselves some needless fear and confusion.

Cowparsnip, Heracleum maximum or lanatum, is a huge native plant that has been described as rank-smelling and woolly. It grows in the same habitats as giant hogweed, Heracleum mantegazzianum, which is of European origin. Both plants enjoy damp soils and both can grow in sun and partial shade.

Cowparsnip leaves can be 2-2.5 feet across, divided into three distinct, maple leaf-like segments. Leaves have an almost velvety appearance from the soft hairs on them. Giant hogweed leaves appear almost ragged, sharp-edged and unevenly lobed. Leaves can be 5 feet across. 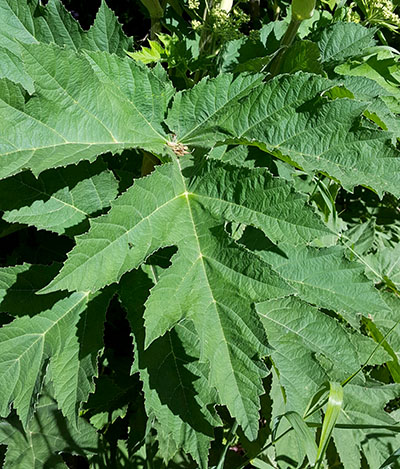 Cowparsnip leaves are divided into three segments and can be 2-2.5 feet across.

Cowparsnip has white, flat-topped umbels that can be 8 inches across. The outer flowers in the umbel can be larger than the inner flowers. Flowers can be up to 1 foot across. It blooms in early June, before giant hogweed. Giant hogweed blooms in late June or early July. The white flowers are also described as umbels, but they have a rounded top, like a modified umbrella. Flowers are 2 feet across.

Cowparsnip has a ridged, hollow stem that is softly pinkish- or purplish-tinged, and there is a very distinctive, inflated sheath at the base of the leaf stalks. The stems are covered by fine, soft hairs. Giant hogweed has a ridged, hollow stem that is very clearly blotched or speckled with purple areas. At the leaf base, there is a ring of long, coarse hairs, like a spiked dog collar, surrounding the stem. 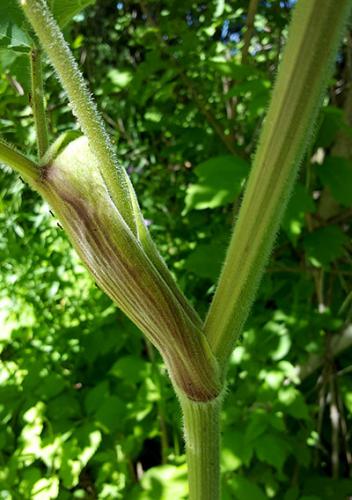 Cowparsnip stems are ridged and hollow, pink or purple, and have a distinctive, inflated sheath at the base.

Cowparsnip is classified as a perennial plant and giant hogweed is classified as a biennial or perennial. Both should be avoided as far as contact is concerned. Smart gardeners will stand back and compare their mystery plant before allowing their blood pressure to soar. Look before you leap is still appropriate.