Cucumber and melon growers are urged to take action against cucumber downy mildew.

Cucumber downy mildew has been confirmed on cucumber leaves in Michigan. Downy mildew disease is incited by a microorganism called Pseudoperonospora cubensis and is a highly destructive foliar disease of cucurbit vegetables. In Michigan, cucumbers, watermelons and cantaloupe are especially susceptible. Symptoms that were observed on the sample included fairly new angular-shaped lesions that were light green to yellow in color. On the underside of the lesions, darker areas could be seen where the downy mildew pathogen was reproducing.

The downy mildew pathogen produces large numbers of sporangia on the undersides of infected leaves. These sporangia mature during the night when leaves are wet from dew or rainfall for several hours. As the relative humidity decreases in the morning hours, sporangia are released into the atmosphere and may be transported via air currents to nearby cucumber and melon crops. The pathogen survives the winter in regions that are frost-free such as the Lower Rio Grand Valley of Texas, southern Florida and the Caribbean, or in protected greenhouses. Sporangia may be introduced into vegetable growing regions via air currents from these overwintering sites. 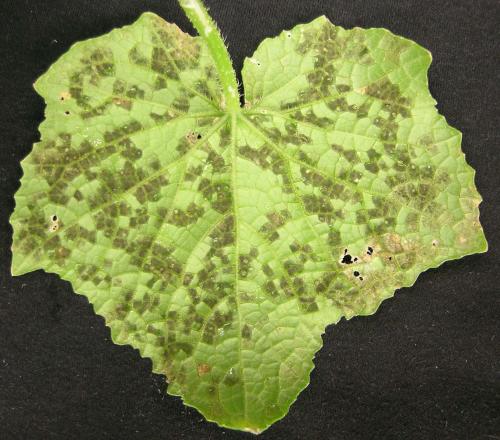 Downy mildew symptoms on cucumber. Darker areas on the underside of leaves are lesions where the downy mildew pathogen is producing sporangia.

Currently, seven-day recording downy mildew spore traps have been placed in the major Michigan cucumber production regions located in the following counties: Saginaw, Muskegon, Allegan, Berrien, Bay, Gratiot and Arenac. Thus far, spore counts from these traps indicate the downy mildew pathogen is not widespread in the state. Michigan State University Extension recommends cucumber and melon crops should be scouted at least twice each week in order to detect the first downy mildew symptoms. It is also recommended that home gardens with cucumbers and melons be scouted whenever possible as these sites are typically unprotected and can serve as the “canary in the coal mine.” For more information on management strategies for home gardeners, see "Cucumber downy mildew management practices for home gardeners."

Given the wet and humid weather conditions this summer, it would be wise for Michigan growers to apply a downy mildew spray to their cucumber and melon crops. Every year since 2005, downy mildew has caused disease in Michigan cucumber crops requiring an intensive fungicide spray program. To date, cultural control strategies and bio-control products have not been able to adequately limit downy mildew on cucumbers and melons. 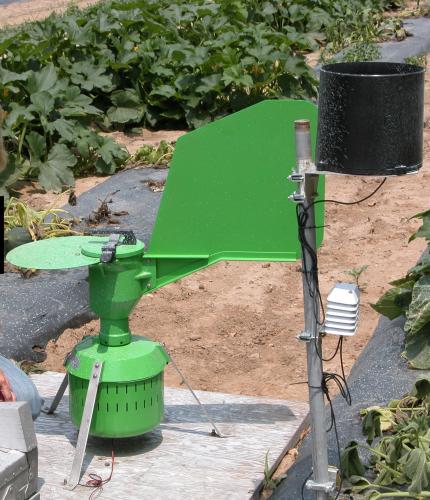 Spore trap in a cucurbit field.

Cucumber downy mildew is resistant to many fungicides including mefenoxam (Ridomil is an example), strobilurins (Quadris and Cabrio are examples) and mandipropamid (Revus). Several years ago, Tony Keinath from Clemson University documented that the fungicides Tanos plus mancozeb alternated with Previcur Flex plus mancozeb provided only 40 percent control of downy mildew on pickling cucumbers; much less control than observed in earlier studies. Since that time, other plant pathologists in the southeast United States have noted similar results and also widespread resistance to other downy mildew specific fungicides.

In 2014, some Michigan cucumber growers experienced control failure; the fungicides Presidio and Previcur Flex had provided reliable and effective control for many years, but did not protect cucumber crops this past growing season. MSU 2014 research field trials verified the recommended fungicides that have always held downy mildew in check were not as effective as before. This is a direct result of susceptible cucumbers, a changing downy mildew pathogen and relatively few effective fungicides. The Michigan pickling cucumber industry is especially vulnerable this growing season; few fungicides provided any level of control in last year’s trials and will need to be applied at short intervals when the weather favors disease.

Cucumbers and melons need to be protected now that downy mildew has been confirmed in Michigan and wet weather continues to favor disease. Examples of downy mildew specific fungicides are listed below. A maximum application interval of seven days is suggested. The application interval may need to be shortened depending on the movement of the pathogen within the state and the weather. Please note that these examples will likely change as the disease progresses in the state and becomes more severe.

The 2015 downy mildew spore counts are updated during the week each day at approximately 4 p.m. and can be found at the Hausbeck Lab website. New updates regarding downy mildew confirmation are also posted and can be found at this site. My lab welcomes updates on new downy mildew reports from growers, consultants and home gardeners, which can be made by sending a close-up photo of the topside and underside of the diseased leaf to hausbec1@msu.edu. Fungicide recommendations could change based on the weather and downy mildew spread within the state and will be updated as needed.