Cucumber downy mildew is in Michigan now. Look for spots on cucumber leaves.

Downy mildew, caused by the microorganism Pseudoperonospora cubensis, appears as angular, yellow lesions on the top surface of infected cucumber leaves. However, the telltale sign of downy mildew is the gray to black fuzz (spores) on the underside of the leaf, giving it a somewhat “dirty” or “velvet” appearance. This fuzz may be most evident in the morning.

Ps. cubensis is an obligate biotroph, meaning it cannot live long without a host plant. This condition restricts the pathogen to warmer climates during the winter months, including southern states and greenhouses. Downy mildew spreads to surrounding fields on air currents via tiny, microscopic spores that act as seeds of the pathogen. Cool temperatures of about 60 degrees Fahrenheit and wet, cloudy conditions create an ideal environment for downy mildew spores to survive outside the host. When the conditions are favorable, unprotected foliage can become completely blighted within 14 days of the initial infection. Downy mildew is well known for causing catastrophic losses in a brief period of time. 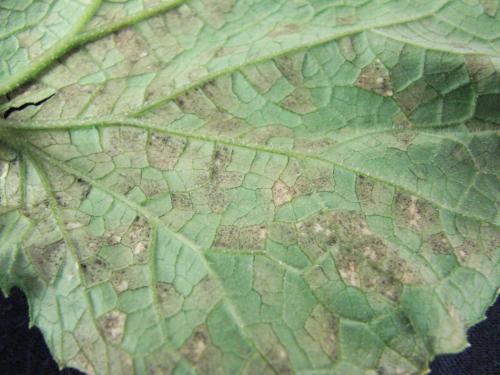 The early appearance of downy mildew in Michigan, along with the wet and humid weather, may make cucumber growing especially challenging this year. Reducing the optimal environmental conditions for Ps. cubensis growth is another option. For instance, gardeners should avoid watering at times when moisture will remain on the foliage for extended periods of time, such as in the evenings. If downy mildew becomes established in or near a garden, fungicides containing the active ingredient chlorothalonil will provide some protection against the disease.

Go to the Hausbeck Lab website (www.veggies.msu.edu) and look under “Cucurbit Downy Mildew News” for more information. If you need help identifying cucurbit downy mildew, click on the link “How to submit samples” for instructions on how to submit diseased samples to MSU Diagnostics Services.