Dairy market fundamentals are somewhat bearish in the near term but bullish in the longer term. 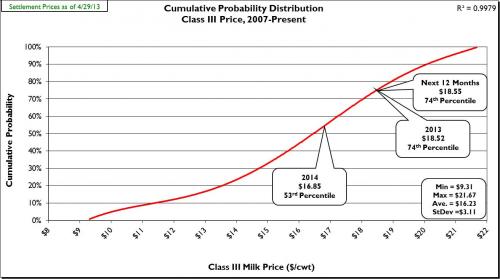 U.S. dairy trade has shown trade surpluses for thirty seven consecutive months. For February, U.S. dairy exports were valued at $439.3 million, up 0.5 percent from February 2012. February marked the 23rd month out of 24 in which exports exceeded $400 million, and equaled 13.5 percent of total U.S. milk solids production. For CY-2013 (January-February) U.S. dairy exports accounted for 40 percent of nonfat dry milk/skim milk powder produced in the U.S., 5.4 percent of cheese, 5.2 percent of butter; 45 percent of dry whey, and 75 percent of lactose.

Dairy Product Inventories: The latest USDA Cold Storage Report showed inventory increases in March for American cheese (+4.5 percent, 680.2 million pounds) and total cheese (+5.4 percent, 1,102.1 million pounds) as compared with March 2012. Both inventories were records for the month of March. March marked the fourth consecutive month total cheese inventory was above 1.0 billion pounds. The February to March increase in American cheese and total cheese inventories was the greatest since 2005 and 1993, respectively. March butter inventory was 22.4 percent above March 2012 at 254.8 million pounds, marking the twentieth consecutive month butter inventory was above the same month last year and setting a record for the month of March.

Outlook: Dairy market fundamentals are somewhat bearish, at least in the short run. Milk production is running essentially even with last year; however, it should be remembered that U.S. milk production in Q-1 2012 was up 4.2 percent vs. 2011. NASS did not report cow numbers in the March Milk Production Report, but considering Mar dairy cow slaughter numbers were down 3,800 head vs. March 2012 one would suspect the U.S. dairy herd did not shrink in March. Margins are obviously improving for dairy producers across the country and one would expect the industry to make a strong push to increase milk output in the coming months. In the longer term many expect the U.S. dairy industry to contract, even in the face of healthy margins, as beef prices remain very strong, steers are bringing in more dollars than dairy replacement heifers, and crossbred calves are more valuable than purebreds. Many are reporting sexed semen usage is down and Holstein heifers are being sold at auctions in lots destined for the feedlot. Many believe this trend will continue pulling dairy animals to beef and eventually begin a noticeable shrinkage of the U.S. dairy herd.

Inventories of cheese and butter are at historical highs for March and we are yet to hit the peak of the spring flush (May-June). However, international dairy product prices are near historical highs and world demand remains healthy. USDEC estimates the top five dairy exporting regions (New Zealand, EU, U.S., Australia and Argentina) will be down over 1.0 percent in combined milk production for the first half of 2013 which is a shortfall of 1.6 million tons of milk as compared with last year. Oceania is winding down their milk production season and reporting their stocks of finished products are only adequate for servicing existing accounts with little extra for other demand. A similar situation exists in the EU. This bodes well for even stronger U.S. dairy product exports in the future. However, high dairy product prices and an increasingly strong U.S. dollar may act as a governor on U.S. dairy exports.

USDA measured feed prices were higher in March than last year (+11.6 as compared to March 2012). On the CME feed prices are down over the past two months with corn down about 10 percent (~57 cents/bushel) and soybean meal down over 11 percent (~$42/ton). Forage prices are at historical highs as heat, drought, and reduced hay acreage played havoc with hay and corn silage production in 2012. The USDA reported U.S. average alfalfa hay price was at $219/ton for March. Other reports indicate prime alfalfa in the Midwest has increased from $190/ton in April 2012 to $300 per ton in April 2013 (+58 percent) while prices have moderated a bit (-10.6 percent to $262/ton) in California’s Central Valley. Also a recent USDA report showed nationwide alfalfa/alfalfa mixed hay production down 15.0 percent (Michigan was down 17.5 percent); the lowest production since 1953. Much of this decline is due to planting decisions and is unlikely to change the hay outlook very soon. There is also widespread concern in the upper Midwest of higher than normal winterkill for alfalfa this year which could dampen 2013 yields and cause further price increases and shortages. Thus far our spring has not been conducive to either forage growth or planting of corn and soybeans, however, it is much too early in the season to push the panic button. The current weather/planting situation should be monitored closely and may influence second half 2013 feed purchasing decisions soon. Also, at this point in the season it appears the drought of 2012 will not extend into 2013, at least not in the major corn producing states.

The consumer confidence index fell to 59.7 in March down from 68.0 in February and 73.7 in November, far short of the 90 level which is indicative of a healthy economy. One expert is forecasting restaurant traffic in the U.S. to pick up by 3 percent in 2013, but average spending per meal is forecast to drop 4.7 percent as consumers cope with the weak U.S. economic recovery. It is important to remember that more than 45 percent of cheese consumption occurs outside the home. Total commercial disappearance finished 2012 slightly below trend increase (+1.5 percent, 2007-2012), but started 2013 on a strong note with January at +2.4 percent as compared with January 2012. In May we will enter the peak month of the spring flush and anecdotal reports are indicating plenty of milk available for cheese production and adequate cream supplies for both butter churning and ice cream production. A break in the weather to warmer, more seasonable, temperatures should help the dairy industry as this would signal the start of the outdoor grilling season (increased cheese consumption), spur consumer travel (increased eating out) and stimulate ice cream consumption. All of these factors positively affect dairy consumption.

In the short term I would not expect any significant strengthening of dairy prices until at least mid-June when the spring flush typically wanes. Strong international dairy prices, declining milk production in the five major dairy exporting nations and continued healthy international demand for dairy products should provide good support for higher U.S. milk prices as we move into summer and fall. As usual, summer weather will potentially impact the situation and deserves close monitoring. In the past, significant summer heat events are usually in place by mid to late June. I expect much better milk pricing opportunities as we move into June and July as compared to current market conditions. However, remember the cure for higher prices are higher prices. Over and over again we find when mailbox prices are in excess of $20/cwt. for extended periods of time commercial disappearance ultimately suffers. Thus, if prices strengthen, don’t make the mistake of assuming they will continue to rise unabated.

As a Michigan State University Extension educator, I recommend that producers sharpen their pencils, calculate their latest cost of production and formulate their 2013-14 milk and feed marketing plan. The market consistently shows it is impossible to sustain Class III prices in the +$20 range for any length of time as both domestic and export commercial disappearance are negatively affected. So, don’t let the greed stage of the greed, hope and fear cycle overly influence your pricing decisions. The USDA is forecasting record acreages of corn and soybeans for 2013 and a return to trend yields. Based on these assumptions, USDA economists are forecasting $4.80/bushel corn and $10.50/bushel soybeans for the 2013 crop. Feed prices at those levels would certainly fuel a surge in milk production here in the U.S. and likely around the globe. Keep your pencil sharp and don’t be afraid of pulling the trigger when prices are profitable even if they are strengthening. Selling into a strengthening market has always been a profitable strategy. Remember: marketing is first about price risk management and secondarily about profit enhancement. Work at increasing your overall average milk price rather than trying to hit the market high. To view a narrated PowerPoint based on this report go to www.msu.edu/~thomasc and click on the button “Narrated PowerPoint” on the front page.

The latest USDA Milk Supply and Demand Estimates report for April saw forecasted 2013 milk production decrease marginally to 201.8 B pounds (+0.7 percent vs. 2012) due “lower milk per cow in the first quarter.” Forecasted fat basis commercial disappearance was down slightly to 196.1 B pounds (+1.4 percent vs. 2012) despite “Export forecast are unchanged from last month … and … improved domestic product demand.” Forecasted 2013 wholesale dairy product and milk class prices were all higher in the USDA’s 2013 forecast for April.