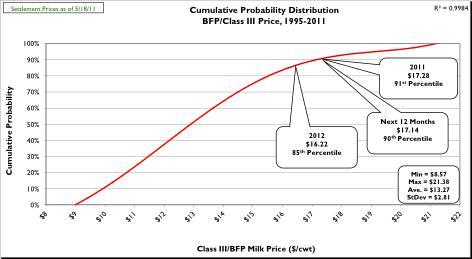 Dairy Product Inventories: The latest USDA Cold Storage Report showed inventory increases in March for American cheese (+2.0% at 614.1 million lbs.) and total cheese (+2.8% at 1,033.2 million lbs.) compared to March 2010. Both cheese inventories set all-time March highs, but were the lowest increases versus the same month in the previous year in many months (American cheese, June 2009; total cheese, November 2008). March butter inventory was 26.3% below March 2010, marking the fifteenth consecutive month butter inventory has been below the same month last year.

Outlook: Wholesale dairy product prices have increased over the past month, and remain well-above historical averages for this time of year. Chicago Mercantile Exchange (CME) Class III futures prices remain very strong. In fact, the 2011, next 12 months, and 2012 average prices have strengthened +$0.14/cwt, +$0.13/cwt, and +$0.15/cwt, respectively. April through June marks the spring flush of milk production in the U.S. which typically results in the lowest dairy product and milk prices of the year. Also, schools will soon be closing for summer break which will decrease fluid milk needs and release more milk to manufacturing plants. All dairy product wholesale prices and milk class prices should remain well-above historical averages for all of 2011, but expect all wholesale product prices and Class III prices to decline over the next 6-8 weeks. High feed and record cull cow prices should limit the growth of the U.S. dairy herd in 2011 and keep milk per cow growth at or below trend. As long as the U.S. dairy export market retains its current strength, dairy producers will be rewarded with milk prices well-above historical averages. The current CME Class III futures average ($17.28/cwt) for 2011 is at the 91st percentile of historical Class III prices (1995-present). This means that only about 9% of the monthly actual Class III prices since 1995 have been higher than $17.28/cwt. Although a crash in Class III prices is not anticipated, there is risk in the market. Most of this risk is on the demand side. Recent history has shown us that world events, whether natural, political, or economic; can have dramatic negative effects on commodity markets. With this in mind, dairy producers should give serious consideration to using price risk management tools (e.g., futures contracts, forward contracts, put options) to market some of their 2011 milk production and reduce their milk price risk exposure. Producers should calculate their latest cost of production and market milk in proportion to their risk attitude and degree of overall financial risk. Remember: milk marketing is about price risk management first; profit enhancement is only a secondary consideration. Visit my website for a full report and other dairy marketing information. For help calculating your cost of production send me an email.