Dairy fundamentals suggest a great deal of risk remains in the market. 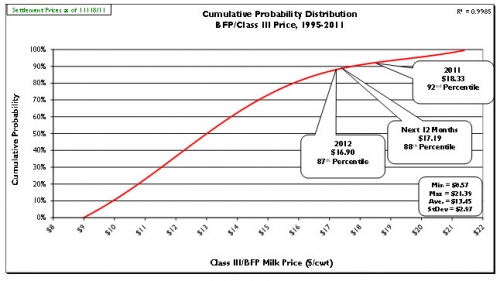 Demand: USDA reports total commercial disappearance in 2010 increased over 2009 (+3.3%), well-above the 1995-2009 average increase (+1.6%). All categories of wholesale dairy products showed above trend increases for 2010 except fluid products. Total commercial disappearance for 2011 has weakened and is below trend increase (+1.3%) through August. All-time monthly records were set for January, February, March, April; but May through August was down 0.9% compared to May through August 2010 despite August setting another all-time monthly record. January through August disappearance of individual product categories was: American cheese, +1.0%; other cheese, +4.7%; nonfat dry milk, -3.3%; butter, +10.0%; and fluid milk, -1.5%.

Dairy Product Inventories: The latest USDA Cold Storage Report showed inventory decreases in September for American cheese (-1.1% at 632.6 million lbs.) and total cheese (-1.3% at 1,040.0 million lbs.) compared to September 2010. American cheese inventories set all-time monthly highs for each of the months from January through May, July, and August. September butter inventory was 16.3% above September 2010, marking the second consecutive month butter inventory was above the same month in the previous year.

Outlook: The normal fall holiday sales season (Thanksgiving and Christmas) will be winding down very soon. The recent strength in cheese prices was not entirely unexpected, but that it reached over $2.00/lb was unexpected by most in the industry. The rise in cheese prices has also translated into higher Class III futures prices. CME Class III futures averages for 2011, next 12 months, and 2012 are up $0.2342/cwt, $0.3167/cwt, and $0.3725/cwt, respectively. Dairy exports remain strong, but are unlikely to increase significantly.

As the normal fall holiday sales season for dairy products winds down in late November and early December look for cheese prices to drop to $1.65/lb or lower and for butter prices to stabilize in the $1.50/lb range. These dairy product prices will necessitate a retraction in Class III futures prices so that front months will most likely be in the low to mid $16.00/cwt range. Hence, current Class III futures prices are offering strong selling opportunities for dairy producers. It now appears likely that additional funds will be allocated to the Livestock Gross Margin-Dairy insurance program. However, these funds will probably evaporate quite quickly due to the enhanced popularity of the program. Furthermore, dairy producers should be reminded that just because one purchases LGM-Dairy insurance does not mean that they should not use futures, options or forward contracts to protect milk and feed prices.