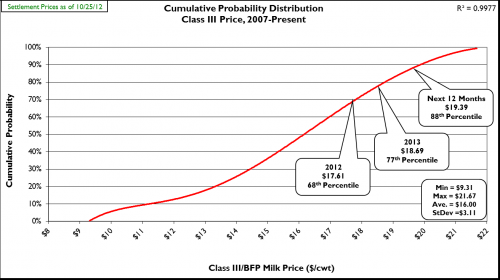 Outlook: Dairy fundamentals continue to show strength as milk per cow and dairy cow numbers continue to decline. The dairy cow cull rate remains at a historical high at 33.0 percent, a full five percentage points above the long term average. USDA dairy cow numbers continue to fall and are down 76,000 head since April. We have not seen such a decline in dairy cow numbers since the second half of 2009 when low milk prices devastated dairy producers across the nation. Very importantly dairy cow numbers in the five major western dairy states (AZ, CA, NM, WA, ID) are down 16,000 head compared with last September. Typically those states run 30,000 to 50,000 head above last year on a regular basis. Industry reports indicate very difficult times have hit the CA dairy industry. A major dairy accounting firm in CA reports that “…10 percent of their firm’s clients sold out in the past year or two, while another 20 percent-30 percent have filed for bankruptcy.” And a recent story in the San Francisco Chronicle reported that more than 100 California dairies are facing bankruptcy, foreclosure, or sale by year’s end. Milk per cow growth since May has slowed to only +0.3 percent as compared with last year and September was down 0.9 percent compared with September 2011 indicating this year’s summer heat stress was significant and widespread. These effects will linger into fall and coupled with high feed prices will act as a governor limiting overall milk production.

Cull cow prices have fallen a bit as red meat production in July grew by about +4.0 percent as compared with last July. However, I would expect cull cow prices to rebound once this temporary glut of red meat works through the system. Thus, above average dairy cow culling rates will continue as dairy producers are squeezed by continuing high feed prices. USDA measured feed prices were higher in September than last year (+8.3 vs. September 2011). Feed prices have fallen over the past month creating some buying opportunities for producers, but corn and soybean meal prices remain +44.5 percent and +36.8 percent (respectively) as compared to mid-June. Also, just as importantly, forage prices are also at historical highs as heat and drought has played havoc with hay and corn silage yields. A recent USDA report showed nationwide alfalfa/alfalfa mixed hay production down 15.0 percent (Michigan was down 17.5 percent); the lowest production since 1953. Thus, the word is out in some areas of Michigan that hay is approaching $400/ton and corn silage $80/ton or higher. I suspect forage prices in many areas of the country will match or exceed these levels. This should keep cow numbers, milk per cow, and total milk production growth below trend well into 2013 and thus maintain higher milk prices.

The consumer confidence index rose to 70.3 in September up from 61.3 in August but remains short of the 90 level which is indicative of a healthy economy. Total commercial disappearance figures for January-July are above trend (+1.8 percent) at +2.6 percent and set all-time monthly records for January-March and May-July. American cheese and total cheese inventories are both below last year (-4.8 percent and -4.9 percent, respectively). Butter inventory is well-above last year (+29.4 percent), but is not at an unmanageable level. The all-important fall holiday dairy product sales season is just now getting underway. This is the most critical consumption period of the year for dairy products. Hopefully the higher consumer confidence will translate into stronger domestic sales this year. However, with cheese prices now over $2.00/lb and butter prices almost as high, past history has shown consumers back off and do not purchase as many dairy products at these price levels.

I expect the block/barrel average cheese price to remain in the $1.80’s to $1.90’s until early to mid-December when the holiday sales season ends as U.S. milk production will continue to decline due to lower cow numbers, the lingering effects of summer heat stress, and high feed prices. Despite high inventories relative to last year, look for butter prices to remain in the $1.70 to $1.80 range until mid-December. Hopefully we can sustain settled Class III prices in the $18.50 to $19.50 range through the end of the year and well into the first quarter of next year. It no longer appears we will see any settled Class III prices breaking the all-time high ($21.67 in August 2011). Dry whey futures prices are now at $0.60/lb. or higher from November through May which holds the potential to support higher Class III prices than indicated by cheese prices

Plenty of dairy replacements remain available to grow the national dairy herd if producers decide to do so. Dairy cattle prices are mixed. Some local Michigan dairy cow sales indicate milking cow prices are softening, but other areas of the U.S. show strengthening prices. With the potential for better margins, look for some dairy producers to seek to expand production through herd expansion. However, high cull prices and high feed prices may be able to moderate that strategy. I’m confident we will see milk production continue to grow well below trend levels into mid-2013. The key number to monitor is dairy cow numbers. If dairy cow numbers reverse the current trend and begin growing again it will indicate whether or not the U.S. dairy producer thinks he/she can produce their way to profitability.

Overall the U.S. dairy export market remains strong at +16 percent versus 2011 levels and the largest bright spot in the dairy industry. August dairy product exports marked the eighteenth consecutive month U.S. dairy exports exceeded $400 million and August exports marked the twenty ninth consecutive month U.S. exports equaled 12-15 percent of U.S. total milk solids production. August exports were up 8 percent over July and valued at $433 million. There is plenty of international dairy product demand to keep our export market strong; it just remains to be seen how much our foreign consumers will purchase at these higher prices. Oceania’s 2012-2013 production season is off to a good start with New Zealand forecasting a 4-5 percent gain in milk output and Australia +2.0 percent (versus two years ago). Early indications in Oceania show no uncommitted stocks of finished dairy products are available for export. Milk production in the EU is “declining seasonally” and “stock levels are often not at desired levels for buyer interest”. International dairy product prices have shown slight weakness in recent weeks, but CWT export subsidies are very helpful in maintaining U.S. dairy export volume. A cloud hangs over the export market due to the debt crisis concerns in many countries which could trigger another major worldwide recession. With uneven domestic dairy consumption, the current market is critically dependent upon maintaining high export volumes. Long term outlook for the export market is very bullish, but that doesn’t preclude the potential for short term problems.

Producers need to sharpen their pencils, calculate their latest cost of production and seriously consider marketing some milk and purchasing some feed. Don’t wait for the pipe dream of $25 Class III futures, plus, take advantage of the lull in the corn and soybean meal prices. Class III prices should remain strong, but past history has always shown that selling milk into a strengthening market is a wise strategy. The market is currently offering very good opportunities to forward price milk. Don’t gamble on trying to hit the high and fail to pull the trigger on some forward pricing now. Don’t hesitate to market small amounts of milk as the market continues to show strength and you will be much more successful in controlling milk price risk. Despite our current bullish market there remain several factors (i.e., unexpected decline in exports, financial/political crisis here or abroad) that could have a negative impact on prices. Remember: marketing is first about price risk management and secondarily about profit enhancement. Work at increasing your overall average milk price rather than trying to hit the market high. To view a narrated PowerPoint based on this report go to my website and click on the button “Narrated PowerPoint”.