Dairy market fundamentals are slowly turning bullish in the near term, but uncertainty clouds the longer term outlook. 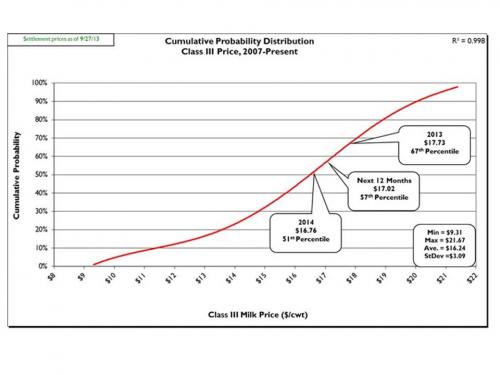 Supply: In August U.S. milk production rose 2.6 percent as compared with August 2012 which was above trend (+1.5 percent, 2007-2012). August production in Michigan increased 3.9 percent compared with August 2012. Due to “sequestration” budget cuts NASS did not report dairy cow numbers or milk per cow for August. However, dairy cow slaughter in August was down 9,300 head as compared to August 2012. Therefore, it is very likely the U.S. dairy herd at least remained stable in August. Average cull cow prices have softened a bit, but remain historically high at $80.90/cwt. (-1.1 percent compared with July 2012). The USDA reports a decrease in dairy feed prices in Sept. of 14.2 percent compared with Sept. 2012. The Sept. milk:feed ratio, at 1.86, was below 2.00 for the thirty second time in the past thirty four months, but the highest since November 2012.

U.S. dairy trade has shown trade surpluses for forty two consecutive months. July U.S. dairy exports were valued at $613.0 million, an all-time July record and up 52.5 percent from July 2012. July marked the twenty eighth month out of the past twenty nine in which exports exceeded $400 million and equaled 17.6 percent of total U.S. milk solids production. For CY-2013 (Jan.-July) U.S. dairy exports accounted for 52 percent of nonfat dry milk/skim milk powder produced in the U.S., 6.0 percent of cheese, 7.9 percent of butter; 54 percent of dry whey, and 75 percent of lactose.

Outlook: Dairy market fundamentals have grown more bullish over the past month. NASS no longer reports cow numbers, at least for the remainder of FY-2013 (through Sept.), therefore no one really knows if the national dairy herd is growing or declining. My suspicion is that it is at least stable as culling remains strong and a high number of replacement heifers are being exported. However, feed prices continue to decline which will inevitably result in higher margins and increased incentive for higher milk output (i.e., more cows and higher milk per cow). Even with current milk and feed prices estimated margins were about 13 percent higher in Sept. (as compared with Sept. 2012) using USDA milk:feed ratio data. This upward trend in milk output is likely to gain even more steam this fall as corn prices in December may drop about 50 percent and soybean prices may drop about 20 percent (as compared with Dec. 2012).

The dairy processing industry is actively gearing up for the fall holiday sales season and cheese processors are reported to be scrambling for limited milk supplies. Even though the most recent USDA Milk Production Report showed Aug. milk output up 2.6 percent over last year, it should be remembered that milk output in Aug. 2012 was down due to heat and drought. Thus, opportunities for “mild” rallies in cheese, butter and Class III prices should arise over the next couple of months. But, don’t expect miracles producing $20 Class III prices. Cheese and butter wholesalers are looking to replenish stocks on what they view as “pricing opportunities,” so also look for volatility in the markets as buyers and sellers jump in and out of the market. Inventories were at record levels for Aug., but should not be problematic especially if the 2013 holiday sales season experiences robust domestic dairy product sales.

International dairy product prices remain above U.S. domestic prices as world demand for dairy products remains healthy. Demand has been particularly bolstered by increased demand from China and Russia. Oceania has begun its 2013-2014 production season which will peak in Oct. Recent reports from Oceania indicate feed prices and pasture conditions are favorable for increased production, but the lingering effects of droughts on the dairy herds has resulted in July and August production below year ago levels. This situation is likely to keep finished product stocks at levels adequate only for servicing existing accounts with little extra for increased demand from China. Recent milk output in the EU is growing at slightly over +1.0 percent, however, strong internal demand is not leading to excessive finished product stocks. Most dairy analysts agree that “global dairy cupboards will likely not be refilled” until at least Q1-2014, if then. The most recent Global Dairy Trade Auction (GDT) on 9/17/13 showed international dairy product prices remaining strong and above U.S. domestic prices. U.S. dairy exports will likely remain very strong well into 2014 if not longer. In the longer term lower feed prices are likely to fuel increased milk production both here in the U.S. and in the major dairy exporting regions around the globe.

Producers should sharpen their pencils, calculate their latest cost of production and look for pricing opportunities for both milk and feed. Class III prices may strengthen on short term rallies as wholesalers fill and feed the retail dairy product pipeline for the fall holiday sales season. But, don’t expect miracles (e.g., $20 Class III) or any long term sustained rallies as we move into fall. Remember: marketing is first about price risk management and secondarily about profit enhancement. Michigan State University Extension recommends that you work at increasing your overall average milk price rather than trying to hit the market high.