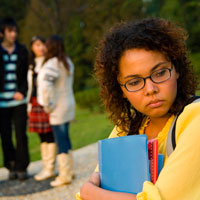 Teens may not call it “dating” but studies show that by the time they are in middle school, many young people are involved in intimate, romantic dating relationships. A study by the Robert Wood Johnson Foundation found that 75 percent of seventh graders report having a boyfriend or girlfriend. For some young people, these are healthy and loving relationships that offer excellent opportunities to explore their beliefs and values about relationships. For too many others, these relationships are unhealthy – and can cross the line into being emotionally and physically abusive. Dating violence can put young people at high risk for long-term health consequences, serious injury and even death.

Dating violence is a pattern of verbal, physical, sexual or emotional violence against a romantic partner. According to the Centers for Disease Control and Prevention (CDC), each year about one in 11 teens report being a victim of physical abuse – and one in five teens report being a victim of emotional abuse. Physical abuse includes behaviors such as shoving, pushing, hitting, slapping, punching, kicking and grabbing. Emotional abuse includes behaviors such as name calling, threatening, insulting, shaming, manipulating, criticizing, controlling access to friends and family, expecting a partner to check in constantly, and using technology like texting to control and batter.

Teen dating violence is a serious public health issue. It’s also more common than many believe – in part because it tends to be misunderstood and under-reported. Some teens, as well as some adults, hold beliefs about relationships that say “it’s okay” or “normal” for emotional and physical abuse to happen within intimate relationships.

In addition, teens who are involved with abusive dating relationships are often afraid or reluctant to tell their parents or another adult for fear of being judged, not believed or having their experiences minimized. When dating violence goes unnamed, unaddressed and unreported, it often escalates and leads to serious lifelong consequences and health concerns.

One way to prevent teen dating abuse is to talk to young people about healthy relationships and what “love” means to them. Help them understand the warning signs and consequences of abusive dating relationships, including the following:

Signs that a young person may be a victim of dating violence:

You can also learn more about teen dating violence at these sites: