The humble daylily, also known as Hemerocallis has to be one of the toughest, yet most rewarding perennials known to man.  Long, strap-like leaves arise from a finger-sized, swollen root in early spring followed by taller stalks adorned by clusters of tubular blooms.  Colors range vastly in this genus of over 30,000 named cultivars and can have many different features such as re-curved petals, striping, water marking and ruffled edges.  The humble “ditch-lily” that you see growing along the roadway cannot begin to compare. 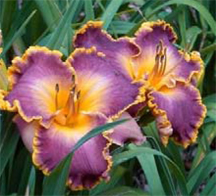 Generally, daylilies are very hardy in Michigan.  Occasionally a daylily will suffer winter damage, especially if it has genetics from a parent that exhibits evergreen traits.  They prefer full sun but in my part-shade garden, they still bloom their heads off.  A robust plant, these care-free beauties do tend to like to eat – fertilizer that is.  A daylily can go unattended for years but to get them to “pour on the color” a spring and fall feeding will help greatly.  Then again, if you have a rich soil, you may not need that second feeding.

When choosing a daylily, look for one that has strong stalks that sets abundant buds.  Blooming for only one day, if you don’t have many buds the color will run out in just a few days.  I also try to sequence the show by seeking cultivars that bloom early, mid-season or late.  In the landscape or garden bed, by planting all three in one general location, color will be revealed throughout a much longer period of time.  Early blooming cultivars such as ‘Happy Returns’ brighten the garden once spring bulbs have faded, but before most other perennials get going.  A mid-season bloomer, ‘Strawberry Candy’ makes a bright companion for any garden.  Late blooming cultivars can sometimes be a challenge to find, but well worth looking for.  A spicy red daylily, ‘Apache War Dance’ is one of my favorites. 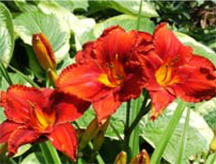 This season there was one daylily that just stole the show.  ‘Buttered Popcorn’ has huge blooms and produces many buds.  Here at the MSU Extension office Grand Ideas Garden, ‘Buttered Popcorn’ started blooming June 21, and now a month later, is just finishing.  Two other yellow/gold daylilies every garden should have are ‘Mary Todd’ and ‘Mary’s Gold.’  Mary Todd blooms mid-season with a nice bright yellow and produces many buds on strong stalks.  I like the foliage better on this one as it stands up well through the summer.  ‘Mary’s Gold’ is a deep, golden-yellow with huge blooms and is definitely a show stopper.  I have all three planted together and the show just goes on and on!

If you ever get started with daylilies, you may find you have a new obsessive personality disorder.   I walked though a day lily farm the other day and just kept gasping! I found each one more beautiful than the next.  Good luck picking.

Rebecca Finneran is a Michigan State University Extension Horticulture Educator, garden writer and lecturer.  You can contact the Kent County MSU Extension office at 336-3265 for program information or log on to www.stuckongardening.com for classes, conferences and program information.