Deer flies and mosquitoes are attacking people in swarms. I don’t have anything much new to tell folks about warding off their attacks. DEET-based repellents still work for mosquitoes, but deer flies are a different matter. The ones that are chasing me around at home belong the genus Chrysops, the true deer flies (see photos).

Deer flies and related horse flies belong to the family Tabanidae. There are about 350 species of tabanids in the United States and Canada. They apparently have their place in U.S. history: Ross Arnett author of American Insects, A Handbook of the Insects of America North of Mexico, reports the following. “It is said the Declaration of Independence was signed by July 4, 1776 instead of a later date that would have permitted further discussion because the horse flies in Philadelphia were biting so fiercely at the time that the delegates decided to adjourn just to get away from them.”

Those of us who are plagued by deer flies have probably noticed that mosquito repellents don’t seem to work against deer flies. The main reason for this failure is that tabanids do not use scent to find their hosts. They use their keen vision and key in on anything that moves. They are among the fastest fliers in the insect world, so somebody who is walking in their yard or jogging down the road, or running full speed for that matter, is really no match for a swarm of hungry and determined deer flies. Wearing a hat definitely helps, they seem to be attracted to hair.

If you live in a deer fly kind of a world and wish to do something about it, then traps and sticky patches are likely your only hope. I found a couple of suppliers of small 3X6 inch patches with sticky stuff on one side that attach to the back of your hat. When flies zoom in, they get stuck and it’s all over for that fly. Somebody down in Florida did some research on the effectiveness of these patches and found them to work pretty well. More on this research can be reviewed at: http://bit.ly/deerflypatches

If you’re interested in trying them, these patches can be purchased through the following web sites:
http://bit.ly/gemplers
http://bit.ly/tucker-deerfly

Another approach to controlling deer flies is to catch them in a trap that uses something other than us for bait. There are commercially available deer fly traps that use motion to attract the flies. One such trap is called The HORSE PAL® fly trap. The following is from the manufacturer. “The HORSE PAL® biting fly trap is constantly on duty, attracting the biting flies in the area and capturing them. The trap is environmentally sound. It requires no smelly or messy baits. The only care required is occasionally removing the capture bottle and dumping out dead flies.” You can read about these traps at: http://bitingflies.com/.

I have no doubt that these traps catch deer flies, but the real measure of success isn’t in the numbers of flies caught by a trap but rather in the measurable reduction in deer fly attacks/bites. These traps are pricy at $265 plus $30 shipping and handling, but the testimonials provided at the manufacturer’s web site certainly do suggest the traps are effective in reducing attacks.

More general information on tabanids can be read at the Ohio State University web site at: http://bit.ly/tabanids 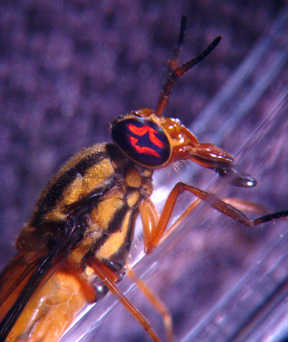 Photo 1. A close up of the business end
of a deer fly. Photo credit: Howard Russell, MSU
Diagnostic Services. 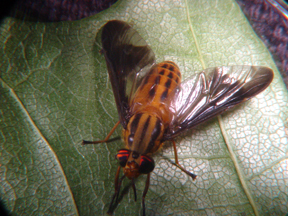 Thinking Ahead About Specialty Crop Marketing and Finance