Mega-trends in forest cover and condition have global and local implications. Deforestation is a threat. However, timber harvest, even clearcutting, especially as part of a management system, is not deforestation.

We often hear that America is losing our forests, but that in itself is largely a myth. The same is especially true for Michigan and across the Lake States. In fact, dozens of countries around the world are experiencing increases in forest area. Some of this growth is due to plantations; however, most of the increase is due to natural forest recovery.

Granted, much of North America’s forest was rolled back two hundred years ago, after rebounding from indigenous human deforestation of centuries before that. Europe lost much of its forest by the fourteenth century, with the Mediterranean, China and much of Asia several centuries earlier. So, any increases might be better called recoveries.

This recent trend of increasing forest area in many countries has occurred in the past, but it is contrary to the norm. Globally, forest area has ebbed and flowed over time, but it has usually ebbed. Our planet continues to see overall declines in forest area, but recently at a much reduced rate. If it were not for losses in Brazil and Indonesia, we would actually be in the black.

Essentially, deforestation is a change in land use from forest to something else. Historically, agriculture has been and still is, by far, the major cause of deforestation. We all need to eat, so that is probably an acceptable reason. Yet, here in the Lake States, agricultural acreage has declined. Like elsewhere across the continent, forests lie in wait for the opportunity to re-take acreage that was once taken away. Of course, growing crops for energy might reverse the reforestation trend, again.

Over the centuries, humans have not been particularly kind to forests. Historically, ship-building, fuelwood, mining, railroads and other activities contributed to deforestation. Deforestation also occurs with urban sprawl and urban splatter, now the major cause of forest loss in the Lake States. Each new home, business, road, golf course and other development involves deforestation when the development is placed in a forest. These are the main reasons why America’s trend of expanding forests is expected to reverse by 2050. 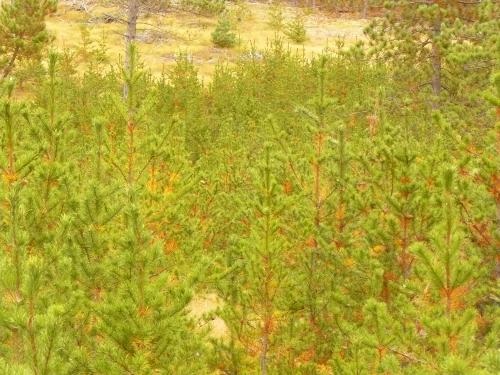 According to Michigan State University Extension, land use issues are growing increasingly important. After all, it is the future that is at stake. We could do better.

Harvesting timber, through forest management, does not cause deforestation, which many folks find surprising. If you think about forests having financial value, which they do, it makes sense to maintain those timber resources. Without wood, we would be in a world of hurt. Countries with better economies also take better care of their forests. Naturally, there are many non-financial values. These also contribute to maintaining forest area and healthy economies.

Even an aspen clearcut cannot be accurately called deforestation. In the same breath that you say “cut” . . . nature is saying “regeneration.” That clearcut harvest not only provides fiber that we all use, just like food, but it also provides the environmental conditions for many of our forests to better reproduce themselves. Harvest and regeneration are two sides of the same coin. If that sounds odd, remember that forest management did not make up the rules of nature. Forestry simply uses them. It is interesting stuff.

An increase in forest area is good news, but it is hardly the whole story. Forest values are not evenly distributed. Some areas are more critical. There is also a long list of other forest characteristics that should be used to determine the “goodness” and “badness” of forest use or deforestation. Forests vary by species mix, age, stand structure, site protection, distance to water, presence of rare ecological aspects, recreation use, visual quality and many other criteria.

We are fortunate, here in the Lake States, to live in a forest-rich part of the world. Perhaps, too many of us take that for granted. It is easy to do, and it is easy to let those benefits slip through our fingers. History shows that happening over and over again, often to the demise of a culture. As Arthur Standish observed about England in 1611, “no wood, no kingdome” Being forest-rich provides a greater incentive to manage and maintain these resources better. Forest management will help guarantee a better future, not work against it.

Packaging: the industry no one thinks about but saves lives