Among collections are biographies of more than 20,000 ships that have sailed on Great Lakes.

This is the first in a series of articles focusing on Great Lakes maritime heritage.

Maritime heritage, according to the National Oceanic and Atmospheric Administration (NOAA), “preserves and protects valuable historical, cultural, and archaeological resources within our coastal, marine, and Great Lakes environments.”  The National Park Service has an active Maritime Heritage Program that “works to advance awareness and understanding of the role of maritime affairs in the history of the United States.” As the Great Lakes State, Michigan is richly blessed with maritime heritage resources, and this series will explore many of them.

In 1949, the J. T. Wing, a Great Lakes lumber schooner at the end of its sailing life – and the last commercial sailing ship on the Great Lake – was donated to the City of Detroit Historical Commission for use as a museum ship. The Wing was landlocked on Belle Isle and became a popular attraction.

When the Wing was declared unsafe for visitors in 1956, the Dossin family provided a gift that resulted in construction of the Dossin Great Lakes Museum on the same site. The museum officially opened on July 24, 1960.

The Dossin was an instant hit, attracting over 100,000 visitors in its first 5 months. In addition to a gallery of model ships and a submarine periscope, the museum installed the Gold Cup hydroplane race boat Miss Pepsi, the incredible Gothic Room from the overnight passenger steamer City of Detroit III, and the Deroy Lecture Hall. A group of supporters formed the Great Lakes Maritime Institute and began publishing Telescope magazine as well as sponsoring activities and educational events at the museum.

In 1975, the dramatic sinking of the Edmund Fitzgerald in Lake Superior focused worldwide attention on the Great Lakes. A major part of the story involved the steamer William Clay Ford which headed out into the storm in an attempt to find the doomed Fitzgerald.

When the Ford was decommissioned in the 1990s, the Dossin acquired the pilot house of the ship and attached it to the river-facing side of the museum. Today it is possible to stand in the pilot house, turn the ship’s wheel and experience what it’s like to be on a Great Lakes freighter. 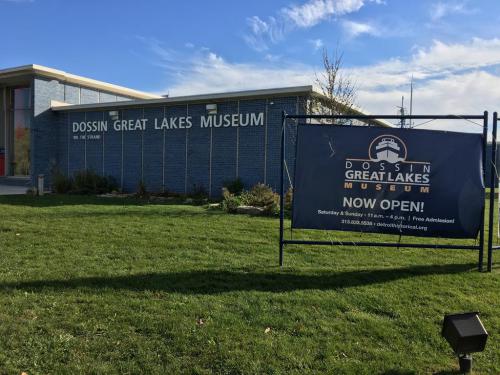 In 2006, the Dossin museum came under the auspices of the Detroit Historical Society and a new era commenced. The museum’s vast collection includes biographical information on more than 20,000 ships that have sailed the lakes, 100,000 photographs and videos, thousands of shipbuilders’ blueprints and hundreds of maritime paintings and artifacts encompassing more than 300 years of Great Lakes history. The maritime holdings gathered at the Dossin are recognized worldwide for their value to researchers.

Events that the Dossin hosts in co-sponsorship with the Great Lakes Maritime Institute include the annual Lost Mariners Remembrance in November, the Fair Winds Fall Dinner, the Holiday Marine Mart and the Dossin Invitation high school rowing regatta in the spring.

The Dossin Great Lakes Museum is, thanks to the success of the Detroit Historical Society’s Fast Forward fundraising campaign, open Wednesdays through Sundays and admission is free.

Another way to learn about our maritime heritage resources is by coming aboard for some of the Summer Discovery Cruises offered on both Lake St. Clair and Lake Erie each year. Sponsored by Michigan State University Extension, Michigan Sea Grant, and the Huron-Clinton Metroparks, Summer Discovery Cruises are a fun way to learn about our many historical, cultural, and natural Great Lakes resources.

Great Lakes freighters - and crews - get ready for 'winter layup'