The number of greenhouse samples received in the diagnostic lab has picked up a bit in the last few weeks. A few diseases have been problematic for multiple growers, others are notable because it is the first time we have seen them this season. 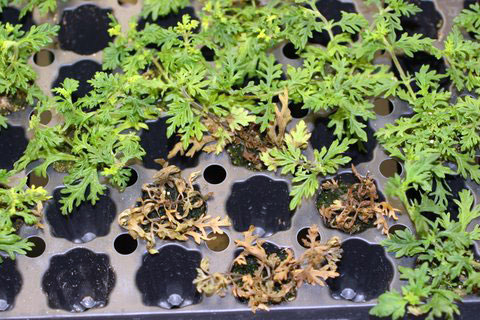 Problems on verbena caused by Phytophthora stem and root rot have been diagnosed on several samples recently. The plants were young and had failed to thrive, in one situation there was some plant death. Other greenhouse ornamentals that are commonly seen in the lab with Phytophthora problems include fuchsia, calibrachoa, nemesia and vinca.

Downy mildew on coleus was confirmed on one sample. Plants were not heavily infected and the symptoms could easily have gone unnoticed had it not been for an alert grower and scout. This is the first time this season we have seen downy mildew on coleus.

Virus problems can occur year-round in greenhouses. The variety of symptoms caused by impatiens necrotic spot virus (INSV) never ceases to amaze me. Symptoms may include ringspots, necrotic leaf spots, blacking on stems and distorted or puckered foliage . Symptoms vary greatly depending on the host plant. Plants recently testing positive for INSV include gloxinia, coleus and impatiens.

Last, but not least, don’t forget Thielaviopsis. The first Thielaviopsis of the season arrived in the lab this week on calibrachoa. This pathogen is seen every year on both annual and perennial ornamentals. Common hosts include petunia, pansy, calibrachoa and fuchsia; this pathogen can also cause disease on a wide range of greenhouse grown perennials. Symptoms include yellowing, wilting and general lack of vigor. These symptoms are easily mistaken for a nutrient deficiency, however plants do not respond to increased fertility.