Recently, the parasitic weed dodder was found in a Michigan field that was frost seeded to clover. Dodder (Cuscuta spp.) is a parasitic weed that is rarely found in Michigan. This annual plant is a true parasitic weed that extracts water, nutrients, and carbohydrates from the host plant. Dodder resembles orange or yellow “string” that grows extensively across and around affected plants (Photo 1). Dodder reproduces by seed that develops in small clusters of white to pink flowers that are reported to show up early in the spring. This hard coated seed has been reported to survive in the soil for up to 60 years. When the seed germinates, it produces an ineffective root that can only support the dodder seedling for a couple of days. Seedling survival is dependent on the availability and proximity (within 1 to 3 inches) of a host plant. Upon germination, dodder seedlings are in search of suitable hosts. When in contact with a host, the dodder seedlings coil counter-clockwise around the host plant (Photo 2). Dodder then produces small sucking appendages known as “haustoria” that penetrate the host plant to extract water, nutrients and carbohydrates from that host, the small initial root of dodder than dies. It has been reported that dodder can grow up to three inches per day, continually producing new haustoria that drain nutrients from the host plant. Dodder infestations can reduce yield and weaken host plants making them more susceptible to other pests and diseases that may eventually kill the host.

Dodder has many crop hosts including: clover, alfalfa, sugarbeet, soybean, dry bean, potato, and tomato to name a few. Several broadleaf weeds have also been reported to be hosts of dodder. Grass species including corn have been reported to be non-hosts. Once dodder is identified in a field, it should be quickly removed before it produces seed. We have little experience with control of dodder, since it is a relatively rare occurrence in Michigan. Glyphosate has been reported to provide some control of dodder; however, this has been reported when glyphosate has killed the host plant. In searching the literature, I haven’t been able to find out how control of dodder is in Roundup Ready (glyphosate-resistant) crops, when the crop is able to tolerate glyphosate applications. If you find dodder in any of your fields this fall or next spring, please contact your local extension agent of myself at sprague1@msu.edu. 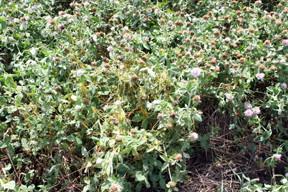 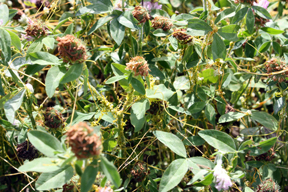 Dr. Sprague's work is funded in part by MSU's AgBioResearch.