Sufficient moisture is critical to avoid drought stress; however, overwatering promotes disease, leaches nutrients and wastes time and money. Here are tips for deciding how much irrigation seedlings need.

In the last few weeks I’ve seen a couple examples of overwatering on vegetable farms. At this stage in the growing season, most vegetables have shallow root systems and low rates of transpiration, so be careful not to over-irrigate. Over-irrigation can promote disease, leach valuable nutrients from the root zone and waste time and money.

Three critical factors should be considered in deciding when and how much to irrigate:

If you are uncertain about how much to irrigate your crops, this brief refresher may help.

Evaluate the rooting depth of your crop and soil moisture to that depth. Although moisture sensors of various kinds can be used to make that assessment, it is often easier and more reliable to just dig up a few plants and squeeze the soil in the rooting zone to get a “feel” for irrigation needs.

Determine how much water is needed to replenish moisture in the rooting zone based on soil texture. Sand holds less water than clay (Figure 1). If your crop is on a very sandy soil that is very dry (at wilting point), approximately 0.6 inches per foot of soil (1.2 in/ft – 0.6 in/ft) of irrigation water may be sufficient to replenish soil moisture reserves (to field capacity). On heavier soils, 1 to 2 inches of water per foot of soil may be required. 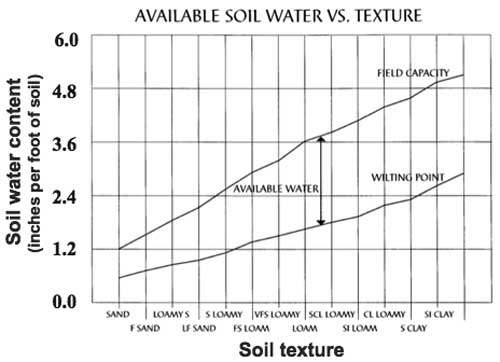 Combine rooting depth and soil texture information to estimate how much irrigation is needed. For example, if you were growing a broccoli transplant with rooting depth of 6 inches on a dry, sandy soil, you might need to apply only 0.3 inches (0.6 in/ft x 0.5 ft) of water to replenish moisture in the rooting zone. On a heavier soil that is very dry, 0.5 to 1 inches may be required. For a more mature broccoli crop with roots that extend a foot into the soil profile, twice as much water may be needed.

Use weather data to help decide when to irrigate next. Evapotranspiration (ET) data such as that provided by Enviro-weather can also provide useful information for irrigation scheduling based on the rate at which water is lost from the soil. However, keep in mind that such data is usually reported as “potential ET” (PET) and is an estimate of how much water is lost from soil in a field with a mature crop stand. Rates of transpiration from immature crops are much lower. For example, a field with young broccoli seedlings may only lose 20 percent of PET. So, if soils were well-watered early on a Monday morning, and PET was 0.2 inches per day for five straight days, 1 inch of water would have been lost from a field with mature broccoli, but only 0.2 inches might have been lost from a field of young transplants.

Dr. Brainard's work is funded in part by MSU's AgBioResearch.