Don’t panic over frost damage to trees and shrubs

Damage may look severe, but plants will usually recover.

Our recent frosty mornings resulted in late frost damage to a variety of trees and shrubs. Frost damage that occurs in late winter or early spring, also known as late frost damage, is characterized by damage to newly emerging shoots and leaves following freezing temperatures. Oftentimes, it may take a few days for damage to become evident, and is usually characterized by browning of new growth, particularly leaves and needles.

The morning of May 8 and 9, 2017, saw temperatures below freezing for much of lower Michigan. This resulted in damage to new growth on various species including baldcypress, sycamores and planetrees (Photo 1), as well as conifers (Photo 2).

As evidenced by these photos, late frost damage is often dramatic and can cause concern for homeowners and landscapers. Fortunately, the damage is largely aesthetic and plants will quickly resume growth. There will likely be some growth reduction in these plants for the current season, but Michigan State University Extension notes there will be little, if any, lasting impact. 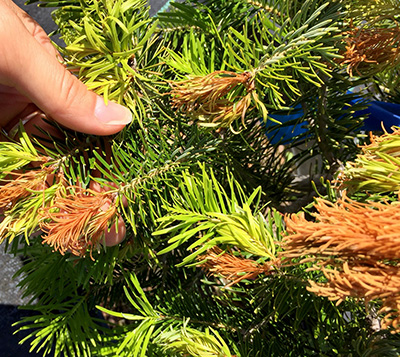 Forecasted temperatures give a green light for planting