Timely burndown herbicide applications in no-till fields are extremely important in protecting soybean yield. Within the next two weeks, soybean planting will be in full-force. As several no-till drills start planting fields, remember the importance of a timely burndown application. The tendency for a number of growers, particularly those planting Roundup Ready soybean, will be to plant into a weedy mess and not worry about applying their burndown herbicide until later or to wait until most of the summer annual weeds have emerged before making their first postemergence glyphosate application. Delayed burndown applications can reduce soybean yield, by inhibiting soybean emergence and growth. Also by delaying applications, weeds become larger and can often times can be tougher to control and many times dense weed populations (or mats) can even interfere with planting.

One way to give the soybean crop an early advantage is to make burndown herbicide applications before or near the time of planting. In MSU trials, preplant burndown applications of glyphosate + 2,4-D ester1 made at least seven days prior to planting, provided excellent control of most weeds present prior to planting. Burndown applications of glyphosate that were delayed until soybeans were at the VC (unifoliate) to V1 (1 trifoliate) growth stages resulted in an average yield loss of 8.3 bushels/acre (Figure 1). Waiting until soybeans were at the V3 growth stages resulted in a 9.2 bushel/acre loss. 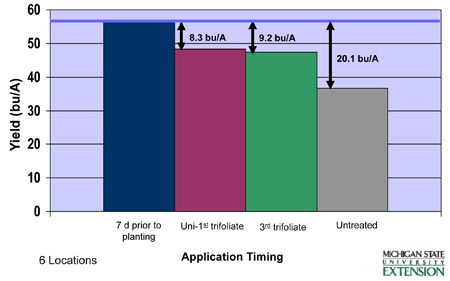 In addition to protecting yield by reducing early-season weed competition, starting the growing season with a clean field will also eliminate several winter annual weeds that may potentially serve as hosts for destructive insects and soybean cyst nematode. Remember early control of these weeds is important. If a burndown herbicide application cannot be made prior to planting, it should be made shortly thereafter. Any delays in these applications can reduce soybean yield. A complete listing of burndown herbicides and their effectiveness ratings can be found in Table 2D of the 2010 Weed Control Guide for Field Crops (E-434). Remember treatments that contain 1 pt/A of 2,4-D ester need to be applied a minimum of seven days before soybean planting.

Dr. Sprague's work is funded in part by MSU's AgBioResearch.