Downy mildew on onions has been confirmed in Michigan. This disease occurs every three to four years in Michigan. It is an especially devastating disease because it can multiply rapidly and spread through a growing region if left untreated.

The downy mildew pathogen initiates infection during cool temperatures, less than 72 degrees Fahrenheit, and wet conditions. Multiple infection cycles can occur in a season. Spores are produced at night and are easily blown long distances in moist air. They can germinate on onion tissue in one and a half to seven hours when temperatures are 50 to 54 F. High daytime temperatures and short or interrupted periods of humidity at night can prevent sporulation.

Overwintering spores, called oospores, can form in dying plant tissue and can be found in volunteer onions, onion cull piles, and in stored infected bulbs. Oospores have thick walls and a built-in food supply so they can withstand unfavorable winter temperatures and survive in the soil for up to five years. 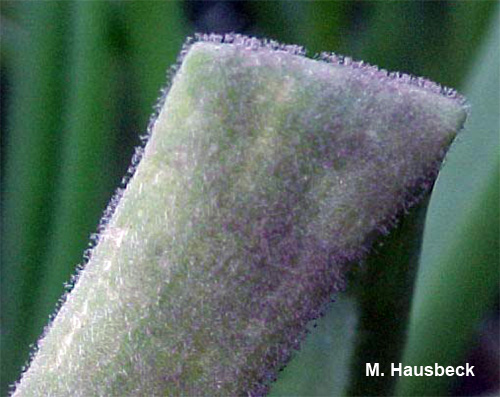 Grayish-violet sporulation on leaf of onions infected with downy mildew.

Purple blotch, caused by the fungus Alternaria porri, is a commonly occurring foliar disease of onions in Michigan. It first appears as small, water-soaked lesions that quickly develop white centers. As they age, the lesions turn brown to purple, surrounded by a zone of yellow. Lesions can coalesce, girdle the leaf, and cause tip dieback. Occasionally, bulbs are infected through the neck or wounds on the scales.

Spores of A. porri can form repeatedly on lesions with cycles of low and high relative humidity. When free water is available, spores can germinate in 45-60 minutes at 82-97 F. Spores can form after 15 hours of relative humidity greater than or equal to 90 percent and can be spread by wind, rainfall and irrigation. Fungal growth is favored by temperatures of 43-93 F with an optimum temperature of 77 F. Old and young leaves injured by onion thrips are more susceptible to infection.

Symptoms can appear one to four days after infection, and new spores can appear by the fifth day. Purple blotch can defoliate the onion crop prematurely, compromise bulb quality and can result in storage rot caused by secondary bacterial pathogens. The purple blotch pathogen can overwinter as fungal threads (mycelium) in onion debris. 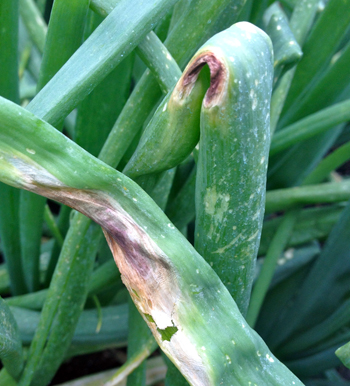 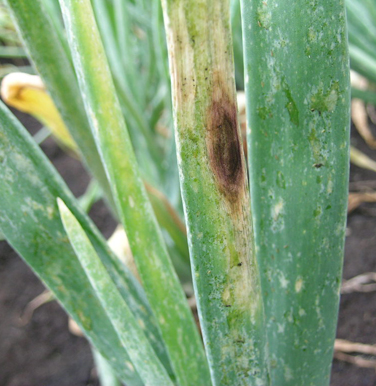 When selecting fungicides, alternate among products with different modes of action (FRAC codes). The table below lists products labeled for use on downy mildew and purple blotch of onions in Michigan. Michigan State University Extension says to remember that the pesticide label is the legal document on pesticide use. Read the label, as they change often, and follow all instructions closely.