Weather conditions across Michigan have been conducive to downy mildew development in hops. Downy mildew infections in northern hopyards have already begun the secondary reproductive cycle which produces the spores that spread this difficult disease. The causal agent of downy mildew, Pseudoperonospora humuli, overwinters in dormant buds or crowns, moving into buds during early spring, and then into the tissue of the basal spikes as shoots expands. The pathogen produces copious spores on the underside of infected leaves. Infection is favored by mild to warm temperatures of 60 to 70 degrees Fahrenheit when free moisture is present for at least 1.5 hours, although leaf infection can occur at temperatures as low as 41 F when wetness persists for 24 hours or longer. 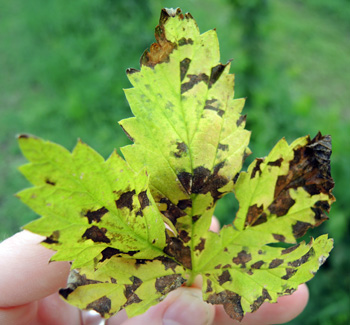 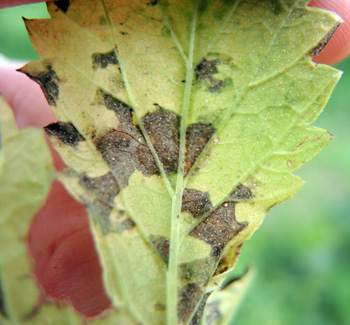 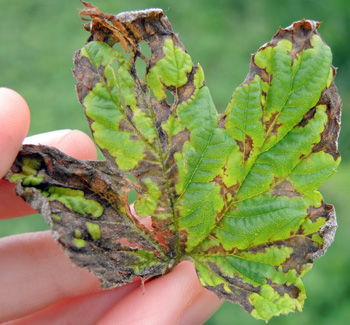 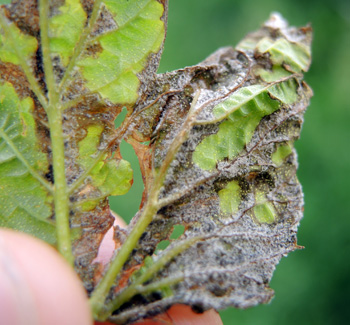 Front and back of a hop leaf with an advanced and sporulating downy mildew infection. Note the gray, tufted spore masses on the underside of the leaf, taken June 18, 2014. Photo credit: Erin Lizotte, MSU Extension

Copper, boscalid, pyraclostrobin, cymoxanil, fosetyl-Al, metalaxyl, phosphorous acids, dimethomorph, mandipropamid, mefenoxam and a number of biopesticides have varying activity against downy mildew. Cymoxanil, dimethomorph and mefenoxam have performed best in the Pacific Northwest, but have not been evaluated in Michigan.

For more information on management strategies for downy mildew, please refer to the Michigan State University Extension article, “Downy mildew of hops already reported in Michigan.” For a list of products containing these active ingredients, refer to the “Pesticides registered for use on hops in Michigan, 2014” resource.