Use fungicides and new cultivars to manage downy mildew.

Although downy mildew can be especially damaging to cucumber and melons, squash and pumpkins may also become infected. The downy mildew pathogen cannot overwinter in Michigan fields but can overwinter in greenhouses or production regions that do not experience a frost. Over the last several years, some fungicides that used to be effective are no longer working well in Michigan. If downy mildew is not effectively controlled, especially early in the cropping cycle, yield loss and misshapen fruit usually occur. Newly released cucumber cultivars with resistance to downy mildew can be helpful but a fungicide program is still required. For Michigan to remain the top producer of pickling cucumbers in the U.S., downy mildew must be controlled. 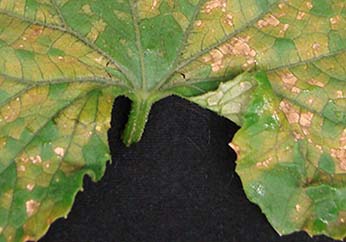 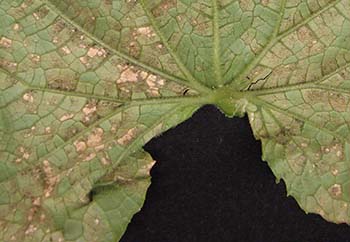 The four cucumber cultivars included 'Vlaspik,' 'Expedition,' 'Citadel' and 'Peacemaker.' 'Vlaspik' and 'Expedition' are industry standard cultivars that are susceptible to downy mildew. 'Citadel' and 'Peacemaker' became commercially available in 2016 and show an intermediate level of resistance to Michigan’s downy mildew isolates. Each treatment plot was replicated three times and were arranged in a split plot block design, with fungicide treatment program being the main plot and cultivar being the subplot. Fungicides were applied every 7 days and disease was evaluated multiple times. Two harvests were taken and fruit were graded for marketable yield. 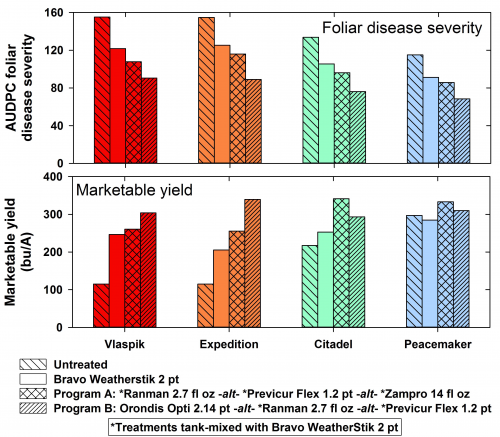 The area under the disease progress curve (AUDPC) was calculated and takes into account all disease ratings to provide a season long view of performance. The graphs show the cultivars evaluated across fungicide treatments (Figure 2).

While the Bravo WeatherStik SC alone program resulted in 'Citadel' yields that were significantly better than the unsprayed, this treatment was not as effective as the other programs when comparing yields. 'Peacemaker' yields did not differ significantly in total yield among the unsprayed and sprayed treatments.

This information is based upon work that is partially supported by the Agricultural Research Fund and Pickle and Pepper Research Committee of MSU, Pickle Packers International, Inc.; a Specialty Crop Block Grant administered by the Michigan Vegetable Council; the National Institute of Food and Agriculture, U.S. Department of Agriculture under award number 2016-68004-24931; and Seminis Vegetable Seeds, Inc.

This material is based upon work that is supported by the National Institute of Food and Agriculture, U.S. Department of Agriculture, under award number 2016-68004-24931.