Michigan cucumber and pickle growers have battled downy mildew, incited by the water mold, Pseudoperonospora cubensis, since 2005. Resistant cultivars are not currently available and fungicides have been the only effective means of controlling this disease. This downy mildew pathogen is resistant to commonly used fungicides including Ridomil Gold-based products and the strobilurin fungicides (i.e., Cabrio, Quadris and Flint). Results from our research have identified a limited number of fungicides that are effective, but must be applied every five to seven days to control downy mildew on cucumbers when weather favors disease (Table 1).

A significant number of airborne downy mildew spores were detected on June 18, 2014 in the pickle-growing region of Bay County. This was the only day in June with relatively high spore counts. With spore detection and the favorable environmental conditions for downy mildew that we’ve had this summer, Michigan State University Extension suggests a fungicide program take place for cucumbers. There are no confirmed occurrences of cucurbit downy mildew in Michigan or nearby states. There have been outbreaks in Florida, North Carolina and South Carolina.

The downy mildew pathogen does not overwinter in Michigan or nearby states. It reproduces via tiny, microscopic spores that act as seeds of the pathogen. The spores travel on air currents from areas where it can overwinter (i.e., southern areas of the United States or protected cucumber production greenhouses) into Michigan each growing season. To help growers determine the level of downy mildew threat, a monitoring system has been in place for Michigan since 2006. In May 2014, spore traps were placed in Monroe, Saginaw and Bay counties, and they continuously sample the air and collect spores into the trap. These spores become imbedded on a sticky film that is removed and taken to the laboratory. A compound microscope is used to identify any downy mildew spores that are present on the tapes.

The numbers of spores per day are uploaded to my “For Growers” webpage at www.veggies.msu.edu. This webpage also features current Extension articles about downy mildew, fact sheets for commercial growers and home gardeners, fungicide recommendations, photos of downy mildew-infected cucurbits and look-alike diseases, and links to other websites, including the MSU Enviro-weather Vegetable page, which also has pest management recommendations for cucurbit downy mildew and the Cucurbit Downy Mildew Forecast website.

The spore traps alert growers to any influx of spores into Michigan’s production regions, but are not the only tools used to time fungicide sprays. Since we do not have a trap in each field or in each county, it is possible that an isolated spore mass coming into a particular region may be missed. In each year that we have trapped downy mildew, spores have been detected before the first case of downy mildew disease was confirmed. In the past, downy mildew spore numbers have been detected by the traps weeks prior to the confirmation of disease in each location.

Alternate products and mix each with either:

*Before downy mildew is confirmed in the area, products should be applied at seven-day intervals, and at five-day intervals after disease is confirmed. Use of the highest labeled rate of products is recommended.
**These fungicides are especially effective under heavy disease pressure.

The Hausbeck lab has been working to ensure that pickle growers will continue to have the most effective fungicide products available. Through our research, the pickling cucumber growers and allied industries will know in advance whether previously effective strategies have remained durable or if alternative products and strategies are needed. In 2013, we tested fungicides, new and unregistered, for efficacy at low and high rates when applied alone or in a rotational program with other downy mildew fungicides; Table 2 lists the fungicides that were included in our research effort. FRAC codes are used to determine the mode of action that the active ingredient has on the pathogen.

Table 2. List of products tested for downy mildew control on cucumber in 2013

Once natural infection by downy mildew was confirmed in Michigan in late July, fungicide field trials were planted at the Southwest Michigan Research and Extension Center in Berrien County. Trials were arranged in a randomized complete block design with four replicates. Sprays were initiated at first true leaf and fungicide applications were applied by broadcast foliar sprays directed to the foliage.

This was a 17-treatment trial on ‘Vlaspik’ that included products applied alone at both a low and high rate (Fig. 1). The untreated control plots showed a foliar downy mildew incidence of nearly 75 percent. Overall, the weather in the Berrien County area was drier than other areas of the state and irrigation was needed. 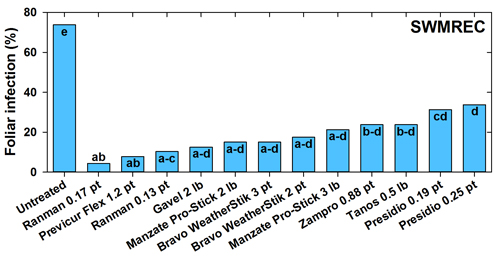 Another trial was established in Berrien County where ‘Vlaspik’ and ‘Arabian’ cucumbers were treated with fungicide combinations/alternations (Fig. 2). Results from this plot answers the questions that growers often ask, including which fungicide program is preferred or most (cost) effective. In this trial (Fig. 2), downy mildew in the untreated control plot was at about 60 percent for ‘Vlaspik’ and 35 percent for ‘Arabian.’ All fungicide treatment programs effectively limited downy mildew compared to the untreated control. Please note that each downy mildew fungicide was tank-mixed with Bravo WeatherStik according to recommendations. The fungicide programs that included Presidio limited downy mildew to less than 8 percent. All other fungicide treatments showed some level of downy mildew with all treatments, keeping disease to less than 11 percent. The cost of using alternating programs of registered fungicides with a total of six applications for the 2013 field season was estimated (Table 3).

Figure 2. Evaluation of cultivars and an alternating fungicide program for cucumber down mildew in 2013 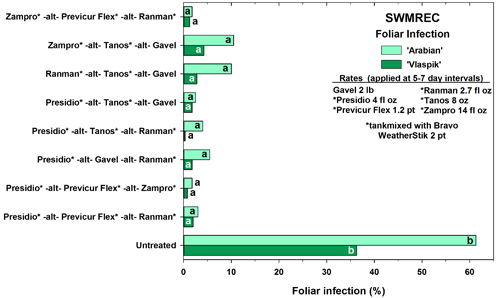 Table 3. Downy mildew fungicide trial cost for the 2013 field season when six sprays are applied. (This is an estimate only. Note that fungicide costs will vary depending on current local pricing, specific products applied and the total number of applications.)

This research was funded in part by the Agricultural Research Fund and the Pickle and Pepper Research Committee of Pickle Packers International, Inc., and by Project GREEEN GR12-020.