Deepening drought conditions and adequate moisture in the western Corn Belt may cause a “double whammy” for some Michigan growers in 2016.

It has long been known that Michigan is climatologically the driest state east of the Mississippi River, and despite some impressive rainfall totals along the I-94 corridor and small portions of many counties across Michigan, the 2016 growing season is living up to this reputation. Raindrops have been rare in many fields across Michigan, and the lack of precipitation is beginning to show up as severe drought stress in many areas. Across the Lower Peninsula, cumulative rainfall totals in most areas are currently 3-7 inches below normal since mid-May when the dry pattern began. The drought conditions are associated with a larger area of abnormal dryness across much of the northeastern U.S.

This is a far cry from how we started out the 2016 growing season. Prolonged wet conditions delayed field operations and planting until mid- to late May in many areas. In fact, substantial numbers of fields of both corn and soybeans suffered from reduced stands due to conditions that were too wet when planted. However, since the crops have emerged, limited rainfall forced the plants to use up these initial moisture reserves quickly.

Many non-irrigated fields had just enough water to keep the crop growing in the rapid elongation growth phase of corn development. Lighter soils in particular were short enough on soil moisture this season to restrict the height of corn and soybean plants in droughty areas. However, in general, we received just enough precipitation in most areas to keep the plants going and keep reasonably good yield potentials on the table.

Regardless, hot, dry conditions over the last two weeks have really begun to take a toll on the plants. Temperatures in the 90s and bright, intense sunshine have pushed potential evapotranspiration rates up in the 0.25-0.28 inches of water per day range, which far exceeds the water available to the crops in most cases. With soil moisture reserves used up to maintain the plants earlier this season, subsequent shortfalls in rain have led to rapidly developing drought stress, often seeming to become severe overnight. In particular, the later planted corn, which began to experience significant drought stress during pollination, has been hard-hit by the stress. Yield losses of 40-60 percent of normal would not be surprising in many of these fields right now, and could become substantially worse if relief in the form of a significant rainfall does not happen this week.

Given the level of soil moisture depletion and current potential evapotranspiration rates, rainfall totals of less than 1-1.5 inches will only have a limited effect at reducing corn stress levels to a significant degree in the areas most significantly impacted. Rainfall may prove to be more beneficial to soybeans than corn, given their stage of development and potential to improve yields by utilizing late-season rainfall to yields by increasing soybean size.

The image below is from the Michigan State University Irrigation Scheduler Excel Spreadsheet. This graph shows the estimated impact of a 1.5-inch irrigation event on a non-irrigated; Oshtemo, Michigan; sandy loam field. Soil moisture levels are so depleted that anything but substantial rainfall will have only short-term impacts on soil moisture levels. The upper dark line on the graph shows the water-holding capacity in the root zone of this soil. The lower line shows the 50 percent soil moisture level for the soil, the lower limit for stress-free growth for corn. Early-season rainfall at the Lawton Enviro-weather station was adequate for excellent crop growth (through the end of June). The Lawton, Michigan, area has received relatively more rainfall than many other areas in southwest Michigan. This schedule shows the estimated impact of a 1.5-inch irrigation on soil moisture applied Aug. 3. 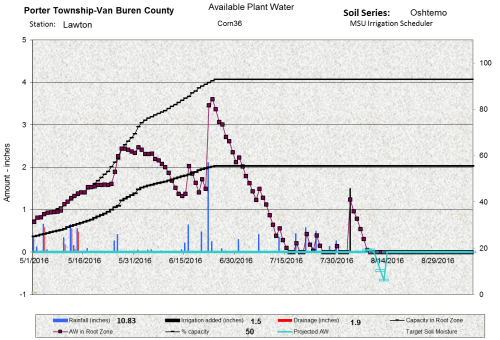 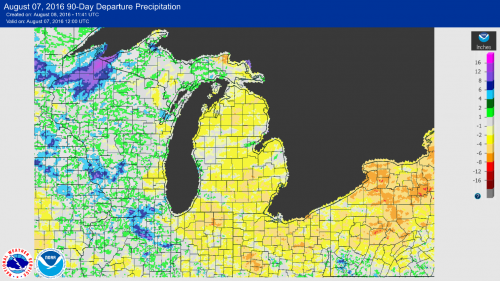 NOAA’s 90-Day precipitation deviation from normal for Michigan. Normal rainfall totals during this period are around 9.25 inches of precipitation, or roughly 3 inches per month. Source: NOAA Advanced Hydrologic Prediction Service.

With adequate to above-normal moisture levels across much of the central and western Corn Belt, corn and soybean yields in the U.S. are expected to be quite high. This has decreased the price of these commodities substantially since June. The prospect of low commodity prices, coupled with poor production in drought-stricken areas, could mean challenging times for many Michigan farmers in 2016 and 2017. MSU Extension has been working with the USDA Farm Service Agency to help quantify potential crop yields and provide data that could help trigger crop insurance and emergency assistance resources for Michigan producers.

In response to the deepening drought conditions across Michigan, MSU Extension has developed a series of drought resources over the years that have recently been updated. The MSU Extension Drought Resources pages is designed to help those growers that have drought-damaged crops evaluate harvest options and opportunities to utilize their crops in non-traditional markets.

Crop insurance: Follow the rules to ensure the best outcome

Impacts of southwest Michigan drought on 2013 corn and soybean yields

Drought and potassium deficiency in corn and soybeans