Growers have been busy bringing in their harvest of dry edible beans, a traditional Michigan crop.

With many soybean acres left to harvest, it can be easy to overlook the bounty of another Michigan bean crop: dry edible beans. The common bean was first domesticated and cultivated by Native Americans in pre-Columbian times. In addition to consuming green beans, Native people often dried the seed for storage and use throughout the winter. During the 16th and 17th centuries, this nutritious pulse was quickly adopted by European settlers along with staple crops like corn. U.S. commercial production of dry beans, centered in Michigan, New York and California, got underway in the early 1880s. Today, Michigan growers raise nine distinct market classes of dry beans including black beans, navy beans, small reds, light and dark kidneys, great northerns and pintos. Producers in our state are expected to harvest over 180,000 acres of dry beans in 2013. 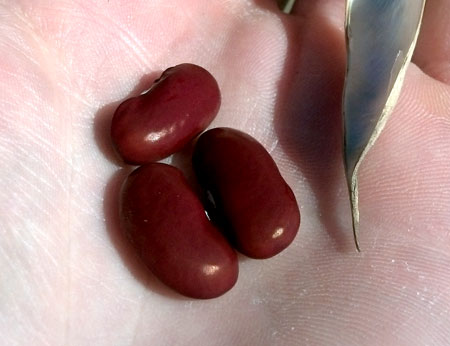 Dry beans have relatively large and delicate seed, making harvest a job for skilled operators. The majority of Michigan growers now direct harvest their bean crop with modifications to combine headers designed for soybeans. According to Michigan State University Extension, direct cutting saves time, but significant harvest losses and damage to the seed are possible if equipment is not properly adjusted. Traditionally, plants were pulled or cut and windrowed before combining. This practice allows the plants to dry uniformly before threshing, yet it also requires more labor and leaves the crop exposed to environmental hazards during the drying process.

Charles Rhode, Jr., a kidney bean grower from Presque Isle County, began harvesting his crop later than usual this year. “With the cool, wet spring we had, the beans were slow coming,” he noted during a quick break from combining. The crop’s slow start delayed development throughout the season and was further complicated by a steak of warm, dry weather that hit northeastern Michigan in late August. These weather-related challenges together resulted in some smaller than average beans and fewer beans per pod. Still, yields have been fair at 13-19 cwt. per acre, and the quality good overall. If the weather cooperates, harvest should wrap-up statewide by mid-October. 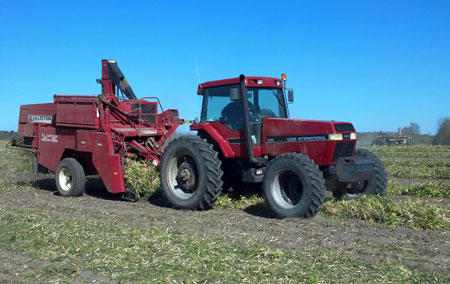 Michigan currently ranks second among dry bean producing states in the United States, projected to average 1,900 pounds per acre for a total yield of 3.33 million hundred-weight bags (333 million pounds) in 2013. Although dry beans are grown in nearly every region of the state, production is concentrated in east central counties where loamy soils improved by tile drainage support high yields.

According to a recent Farm Service Agency acreage summary, in 2013 Huron County will harvest 60,273 acres; Tuscola County 29,588; Sanilac County 18,439; Bay County 15,153; Montcalm County 6,523; and Saginaw County 5,175. Northeast Michigan producers only grow approximately 3,500 acres of dry beans, but this figure accounts for nearly half the state’s dark red kidneys. Fifty percent of Michigan’s dry bean crop will be consumed domestically as bagged or canned product. The rest is shipped to international markets in over 100 different countries.

The Michigan dry bean industry represents a significant contribution to the state’s economy. The farm gate value of this year’s harvest will be over $75 million. The crop’s impact is also felt elsewhere along the value chain among suppliers, marketers, shipping contractors, packers and processors. Consumers can actively support this important industry by purchasing Michigan-grown dry beans and bean products.