No current signs of a break in recent weather patterns means continued warmer and drier than normal weather during the upcoming week.

Hot, dry weather covered large portions of the Midwest including Michigan during the past week, resulting in a large, upper air ridge of high pressure across the center of North America (Figure 1). The unusually dry conditions have led to rapidly draining soil moisture reserves and water stress in many unirrigated crops. 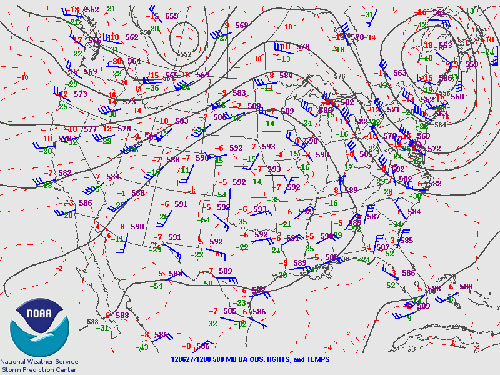 The general upper air pattern responsible has persisted in one form or another across the region since early May. Current rainfall deficits in southern sections of the state are generally in the range of 2 to 5 inches below normal (Figure 2). Normal rainfall for the same time frame ranges from a little more than 5 inches in extreme northeastern sections of the state to more than 7 inches in the south. Rainfall expressed as percentage of normal for the past 60 days is given in Figure 3. 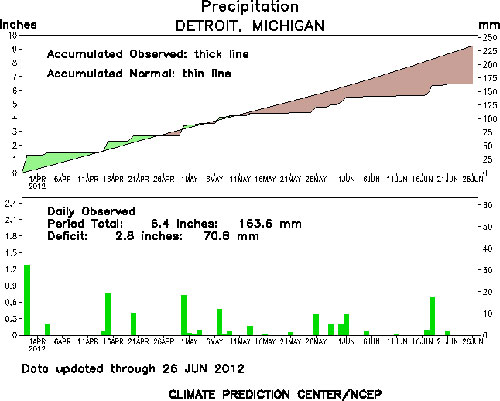 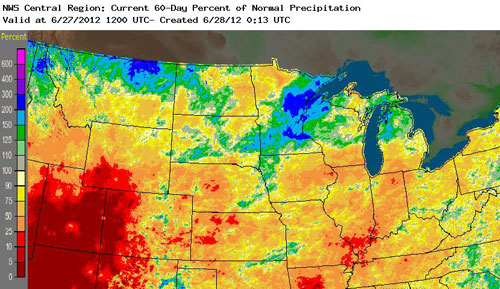 As Figure 3 indicates, Michigan is along the northeastern periphery of a much larger area of abnormally dry conditions stretching across eastern and central sections of the Corn Belt to the lower Mississippi River Valley and westward to the Rockies, where it is a major contributing factor to the extreme fire danger conditions currently being experienced there. In sections of the Ohio Valley, the dryness is as intense as recorded in 1988, the last major, region-wide drought. In contrast, rainfall across northern sections of the Great Lakes and Great Plains regions (including northern Michigan) has been much heavier and more frequent, with some areas reporting more than 200 percent of normal values.

Looking ahead, there are currently no signs of a break in the recent pattern. The upper air ridging across central sections of the country is generally expected to persist during the upcoming week, with continued warmer and drier than normal weather a strong bet. With the passage of at least two weak frontal boundaries, there is a chance for some widely scattered showers and thunderstorms (generally 0.25 to 0.50 inches or less) late Saturday and Sunday (June 30-July1), and again by the middle of next week. But unfortunately, areal coverage of any precipitation will be very limited and most areas will remain dry. Daytime temperatures will generally range from the low and mid-80s north to low 90s south through the upcoming weekend with lows in the 60s to low 70s. Daily reference potential evapotranspiration rates (the amount of evapotranspiration of an unshaded, well-watered, 4-inch grass-covered surface) will generally range from 0.20 to 0.28 inches per day.

Further ahead, medium range forecast guidance is suggesting more of the same pattern during the next one to two weeks, with warmer temperatures forecast across large sections of the central United States including Michigan. Both of the latest Climate Prediction Center 6-to-10-day and 8-to-14-day outlooks (covering July 3-7 and 5–11) call for above normal mean temperatures and near to below normal precipitation totals. One exception is far northwestern sections of the state, where above normal precipitation totals are possible during the next 6 to 10 days. This pattern highlights the importance of the exact location of the upper air ridge axis during the next couple of weeks. If it remains further east across the Mississippi Valley, warmer and drier than normal is almost guaranteed in Michigan. If it sets up further west across the High Plains or Rockies, Michigan would be more under the influence of northwesterly winds aloft, with relatively cooler temperatures and more frequent chances for precipitation (similar to northern Michigan during the past couple of weeks).

The most recent suite of Climate Prediction Center long lead outlooks for the month of July and the three-month July through September period have been adjusted and now call for increased odds of warmer and drier than normal weather across areas of the central Corn Belt region extending northeastward into southern and western sections of Michigan. These outlooks and changes relative to previous forecasts are based largely on recent medium range forecast guidance and on the climatological tendency of warm season dryness to persist in central sections of the country after large areas have already become abnormally dry (as is the case this year).

Be a smart gardener and protect lakes, streams and wetlands