These arthropods were of special concern during the last two weeks, with many calls and emails to Michigan State University Diagnostic Services. Click on an insect or spider name to read more about it:

The masked hunter, Reduvius personatus (Hemiptera: Reduviidae), is an interesting insect that occurs throughout the U.S. and southern Canada. Adults and nymphs are predators that feed on other insects including flies, carpet beetles, mealworms and bed bugs.

The adult bug is dark brown or black and about 0.75 inch long. The nymphs or immatures are covered with microscopic hairs that catch and hold dust, lint and other small particles of debris. This camouflage helps the nymph to ambush prey, hence the common name, "masked hunter." They look like a puff ball as they move across a wall or ceiling.

These insects will bite people with their needle-like beak if threatened or handled roughly. Their bite is said to be very painful and can result in localized swelling. The masked hunter is thought to have been introduced into the U.S. from Europe in the late 1800s. 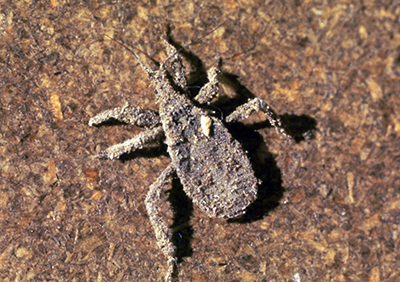 Several people who sent me photos were worried kissing bugs had moved into their homes. Kissing bugs, also known as bloodsucking conenoses (Triatoma spp.), are very large assassin bugs that live out West and feed on the blood of rodents and sometimes people. They transmit the Chagas disease pathogen to people.

Kissing bugs have been recently found in Tennessee and Georgia, but none have been found in Michigan that I am aware of, so try to relax. 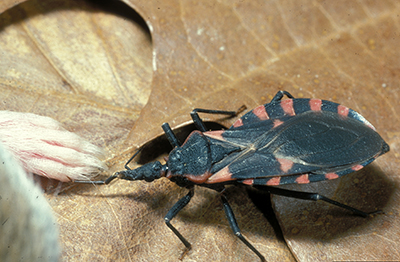 Bird mites have started to show up in homes

We received two reports of bird mite invasions last week. One came from a vet clinic in Tawas City, Michigan, in Iosco County. The other occurred in a bathroom in Oakland County. In both cases, birds had built a nest on the structure. Mites in the genera Dermanyssus and Ornithonyssus are external parasites of bird and rodents.

The most commonly encountered members of this group are the chicken mite and northern fowl mite. Both are parasites of poultry and wild birds, and can survive more than a month without a blood meal. These mites are known to infest homes and bite people when birds build their nests on homes.

MSU Extension recommends removing the nest and treating the nest area with a persistent insecticide—this is normally all that is required to control bird mite invasions. Bird mites are often cited in cases of invisible itches where cause of the itches cannot be determined. 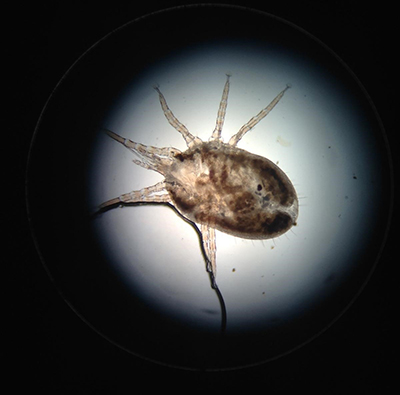 A gentleman from Monroe, Michigan, sent us some very dramatic photos of his spruce tree getting hammered by gypsy moth caterpillars. 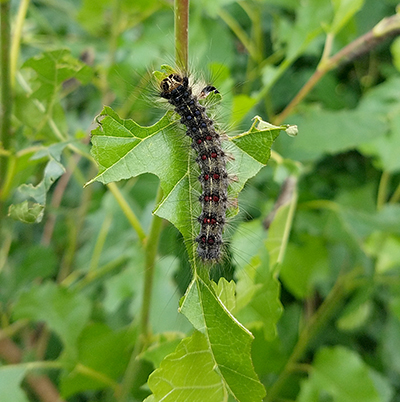 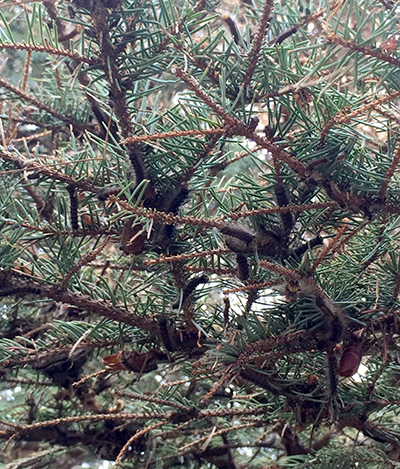 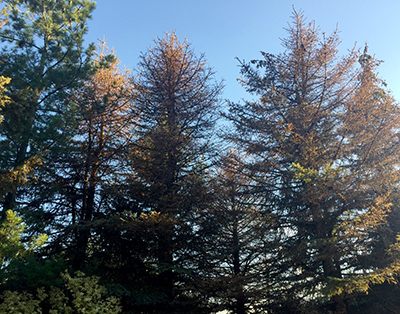 The crusted root weevil, Trachyphloeus bifoveolatus (Coleoptera: Curculionidae), came to us from Europe. They have been on the West Coast and the Northeast for some time, but are a more recent introduction into Michigan. In Oregon, they are called "grass weevils" because they are often found in weedy areas.

They have a habit of migrating into homes in summer and fall months, often in large numbers. They are covered with scales, including some that are spatulate (wide and flat) and stand erect. However, the entire weevil is often covered in an encrusting "crud,” which gives them their common name but makes the scales and other details difficult to see. 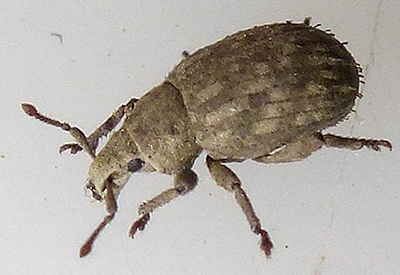 A Frankenmuth, Michigan, resident sent us a very nice photo of a dobsonfly they found while walking along the Cass River. The dobsonfly, Corydalus cornutus (Megaloptera formerly Nueroptera: Corydalidae), and its larval stages, known as hellgrammites, are among the largest and most primitive-looking North American insects. Both may be over 3 inches in length and certainly qualify as insect dinosaurs.

Male dobsonflies have very long, showy mandibles. Hellgrammites are vicious predators that live under big rocks, branches and stumps in larger, well-aerated streams and rivers. They can deliver a very painful bite if not handled carefully.

Go to “Holy Hellgrammites!” to see a video of a friendly hellgrammite. 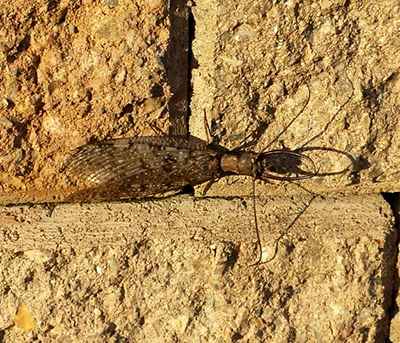 A dobsonfly found along the Cass River in Frankenmuth, Michigan, on June 23, 2017. Photo by Dave Geiger.

Several people reported finding northern widow spiders in their yards. The most interesting report came from Escanaba, Michigan, in Delta County, which is the first time I am aware of someone finding one in the Upper Peninsula. Northern widow spiders are found throughout the eastern U.S., from southern Canada south to Florida, and west to eastern Texas, Oklahoma and Kansas.

In Michigan, they appear to be more common in the western Lower Peninsula. They can be found in old stumps, hollow logs, under fallen fence posts, in abandoned animal burrows or piles of brush and in the corners of sheds and crawlspaces. The distinctive "hour glass" marking on the underside of the abdomen is incomplete or split in the middle on northern black widows.

Many northern widows also have a series of red spots along the dorsal midline of the abdomen. The web of widow spiders is an irregular haphazard mesh of strands in which the spider hangs upside down. Read more about northern widows from BugGuide. 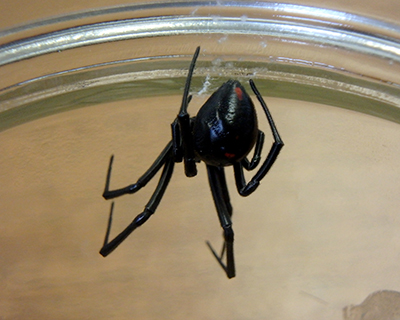 Northern window spider from the Upper Peninsula in Escanaba, Michigan, on June 28 2017. Photo by Gerald Pirkola.

We received the first report of the year of adult European chafer activity this past week. A Charlotte, Michigan (Eaton County), resident reported hundreds of “bees” flying around her two silver maple trees. She realized they weren’t bees when she took the photograph below of the beetle.

European chafer adults resemble June beetles. They are light brown, about 0.5 inch long with dark lines (striations) running down the back. Adults usually swarm in large numbers around trees and other tall objects at dusk. It is this swarming that leads people to think they are bees. They are said to just nibble on foliage, but this person reported them to be “stripping the leaves off our trees." 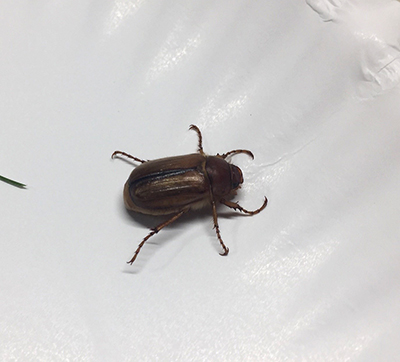 Several people sent us photos of the spotted Mediterranean cockroach, Ectobius pallidus (Blattellidae), which was once only found in the U.S. in Massachusetts. About 15 years ago, this European species showed up in Traverse City, Michigan, and since then it has slowly spread across the Lower Peninsula. None have been reported from the Upper Peninsula.

This species is normally considered an outdoors species that does not infest interior spaces, however, several people who sent us photos or specimens found them inside their homes. This pale-brown cockroach is much smaller than the German cockroach and lacks the dark lines on the pronotum that characterize the latter. The wings have many tiny, dark spots that can be seen only with the aid of a hand lens. The nymphs are also pale brown but with rows of dark spots on the back.

The spotted Mediterranean cockroach has been found in the following Michigan counties: 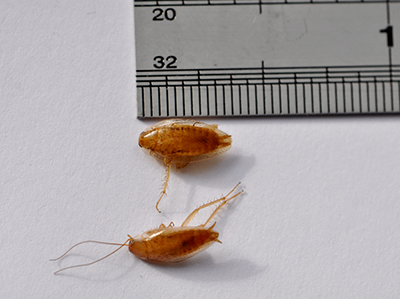