Early season pests such as corn flea beetles, bean leaf beetles and alfalfa weevils may get off to an early start with Michigan’s warm winter.

With warmer than normal average winter temperatures and, at least so far, a lack of an extremely cold arctic blast, many insect pests that overwinter in leaf litter in and around fields in Michigan may have had an excellent chance to survive. Early season pests such as corn flea beetles, bean leaf beetles and alfalfa weevils may get an early start at causing challenges for corn, soybean and hay fields across the state.

Corn flea beetles, a small (1/8th of an inch long), black beetle that feeds on corn plants, is usually not a significant pest of commercial corn hybrids. However, the pest often carries a bacterial disease, Stewart’s wilt, that is particularly a concern for sweet corn and for seed corn production. The more flea beetles that survive the winter, the greater the chance that the bacteria that causes Stewart’s wilt, Pantoea stewartii., will be transmitted to seed and sweet corn plants.

Stewart’s wilt can cause significant yield and quality losses in seed corn. Scouting for the pest should begin as soon as the plants begin to emerge. Flea beetles cause linear feeding damage on the leaf epidermis. Stewart’s wilt causes yellowish streaking leaf symptoms; advanced symptoms can be brownish, discolored, vascular tissue in stems. Commercial corn thresholds for treatment are when half of the plants show feeding damage and there is an average of five beetles per plant. Treatment strategies for seed corn are more likely to be preventative. Check with you seed company agronomist for guidance on when to treat for corn flea beetles. View a listing of insecticides and their use rates for corn insect control. 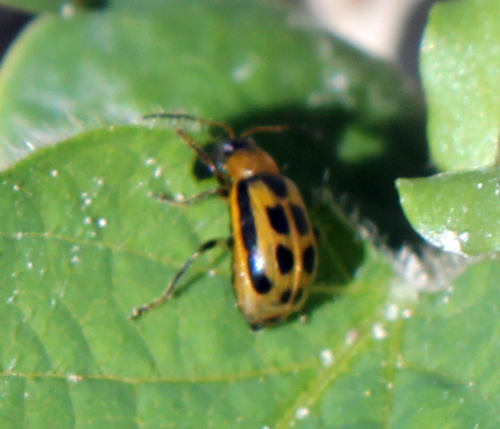 Bean leaf beetles also overwinter as adults in the leaf litter near fencerows and woodlots. When conditions begin to warm in the spring, the beetles are likely to move into early planted soybean fields where the adults will feed on early emerging soybean plants. Soybeans are capable of withstanding significant feeding early in their vegetative growth stage without causing yield reductions. The threshold for treatment in seedling stage soybeans is 50 percent defoliation.

Like the corn flea beetle, bean leaf beetles can carry a pathogen. Overwintering bean leaf beetles can carry the bean pod mottle virus and spread it to the young soybean plants. The virus can cause a reduction in soybean yields by reducing seed size. It can also cause the condition known as greenstem where the stems remain wet even after the grain is dried and ready for harvest. Bean leaf beetles can increase in fields and cause damage by feeding on pods later in the season. The treatment threshold for pod feeding is 10 percent. Go to MSU Extension Bulletin E-1582 for a listing of insecticides and their use rates for soybean insect control. 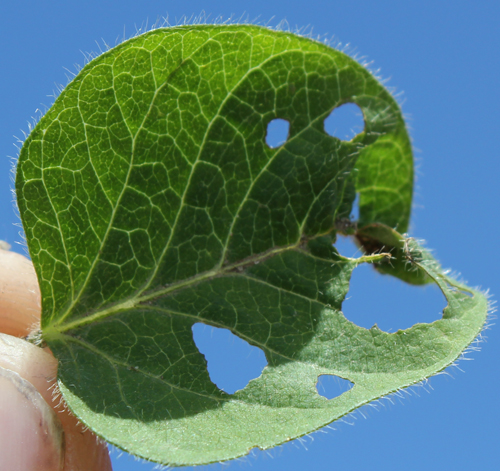 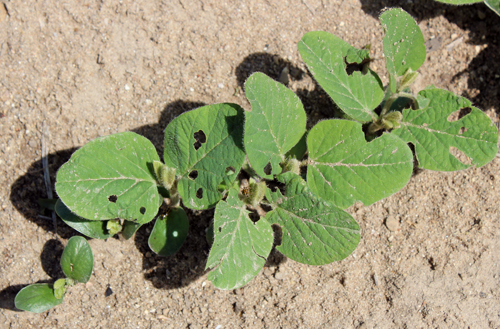 Alfalfa weevils also have greater potential to cause challenges following a warmer than normal winter. Alfalfa weevil adults are grayish brown in color with a dark stripe running down their backs. Alfalfa weevils overwinter as adults in leaf litter adjacent to fields. Adults move away from their overwintering location and begin to feed on alfalfa soon after it breaks dormancy. Watch for early feeding and egglaying damage to occur on southern exposed slopes that are protected from the winds.

The weevils lay eggs on the stems of plants. The eggs hatch and the young larvae begin to cause leaf tip feeding damage (round holes) near the margins of leaves. Larvae are light green with a white stripe running down the back. Damage from larvae is prevalent in many locations in Michigan. Threshold for treatment prior to first cutting is reached when 40 percent leaf tip damage and live larvae present. Go to MSU Extension Bulletin E-1582 for a listing of insecticides and their use rates for alfalfa insect control.

For more information on chemical control options and thresholds for these pests, and a whole host of other great information, visit MSU entomologist Chris DiFonzo’s MSU Field Crops Entomology website. The MSU Enviro-Weather website provides growing degree day information that is useful in deciding when to harvest hay and scout for insect pests. An Enviro-weather station close to you can be accessed on the web by visiting the Enviro-weather website and clicking on a yellow dot on the map.