Spring caterpillar hatch can be lessened without using chemicals by finding and eliminating the egg masses from which the caterpillars hatch.

Every spring eastern tent and gypsy moth caterpillar seem to appear out of nowhere to feed on the leaves of our Michigan trees. This article is the first of two written by Michigan State University Extension that give an overview of the caterpillar – moth life cycle and how and where to find and remove their egg masses in an effort to provide non-chemical control options to landowners.

The eastern tent caterpillars have come and gone this year, but the lappet moth stage of Malacosoma americanum can still be found. Caterpillars are just one stage of a moth’s life, one that we tend to notice because of the obvious tents and temporary damage they can do to the leaves on our trees and landscape. 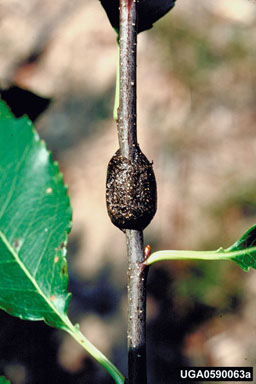 As it is eating, the eastern tent caterpillar is also growing by molting, or shedding its skin, as it progresses through six larval instars. Once growing is complete, the caterpillar will enter a pupal stage that takes place within a cocoon. During the pupal stage, the body of the eastern tent caterpillar is transformed into a moth through a process called histolysis, which literally means histo (tissue), and genesis (the beginning).

After around 3 weeks of pupation, a lappet moth emerges from the cocoon. Moths do not feed, but live to breed and lay eggs to produce next year’s caterpillars. The lappet moth lays its eggs near the tips of the branches of suitable host trees so that the eastern tent caterpillars hatching the following year will have easy access to food when they emerge. The caterpillars actually develop individually in each egg soon after it is laid, then overwinter in the protective egg and chew their way out next spring just after the leaves of the host tree begin to develop.

The best way to control the population of the eastern tent caterpillar in your landscape is to closely inspect the branches of your trees for egg masses. This is best done after the eggs are laid in August of one year and before the eggs hatch in May of the following year. The egg mass of the eastern tent caterpillar resembles a shiny black jellybean encircling a small branch on a cherry tree, or a related fruit bearing tree. To destroy the egg masses, scrape them off the branch into a bucket of soapy water and let them soak.

If you don’t locate all of the egg masses, and find eastern tent caterpillar nests in your landscape next year, simply pull the nest off of the tree and drop it into soapy water. Individual caterpillars not in the nest may be handpicked and destroyed in the same water. For nests that are out of reach, simply open up the nest to allow predators access to the caterpillars.