Browning Siberian elms in spring are the result of leaf feeding weevils.

Are leaves on your elm trees turning brown and have numerous tiny holes in them? The likely culprit is the European elm flea weevil, Orchestes alni. Leaves barely begin to develop in spring before they are attacked by elm flea weevils.

Adult elm flea weevils emerge in spring and begin feeding on the underside of new elm leaves, creating small holes. Females immediately begin to deposit eggs into holes they chewed in leaf veins. Tiny larvae hatch and begin to feed on the inner layer of the leaves. These leaf mining larvae remain inside the leaf feeding for several weeks and eventually form a cocoon to change over to their adult form.

The adult weevils emerge from leaves and continue feeding on the elm leaves through the rest of the season. After leaf fall they will find protection from winter under loose bark or in the leaf litter. The European elm flea weevil is believed to have one generation per year.

A branch of a Siberian elm tree was brought into the Michigan State University Extension office in Ann Arbor on May 22, 2017. This elm tree sample had adult elm flea weevils feeding on the leaves, egglaying sites on the veins of leaves and actively feeding larvae inside the leaves. With both the adult and the larvae feeding on leaves, it takes very little time to consume the foliage.

European elm flea weevils were first found in the Midwest in 2003. Howard Russell, an entomologist at MSU Diagnostic Services, reported they were first seen in Michigan in 2008. Nine years later their leaf feeding damage is commonly seen on Siberian elms across southern Michigan.

Last summer, a few large Siberian elms in Jackson, Michigan, were almost totally defoliated by flea weevil feeding. These trees were able to produce a second set of leaves later in the season. Our native American elms are not as desirable to the leaf feeding weevil. 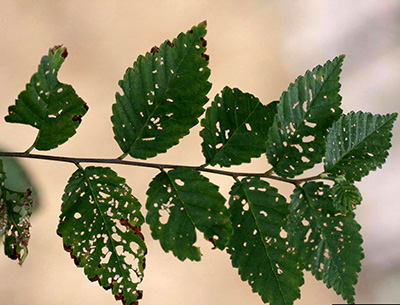 It is hard to believe a small insect can be such a nuisance. Adult elm flea weevils are only 3 millimeters long. The adult is a reddish-brown beetle with dark spots on its wing covers. The head and snout are black and the hind legs are enlarged for jumping. It can be seen jumping when the foliage is disturbed.

It will feed on Chinese, American and European species of elm as well as elm hybrids, though it prefers Siberian elms. Damage may be purely cosmetic on less preferred species and should be evaluated to determine if any treatments are warranted on trees that go through more extensive feeding damage.

It is important to prevent further stress from environmental issues, such as drought, to protect the vigor of the tree. Due to the size of elm trees, it is often practical when managing infestation of European elm flea weevil to use a systemic pesticide either injected into a tree or poured around the base of the tree.